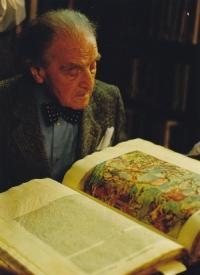 Meetings with Books: Raymond Klibansky, Special Collections and the Library in the 21st Century is a one-day symposium hosted by the McGill University Library taking place on March 20, 2013 at the Faculty Club Ballroom, 3450 McTavish. The event will bring together scholars and librarians to discuss the full and complex potential of special collections and rare books. The event includes a keynote lecture on curiosity by author Alberto Manguel.

The symposium will also pay homage to Raymond Klibansky, leading 20th-century thinker and late McGill professor who bequeathed his extraordinary collection of more than 7,000 works to the university. Part of his collection is now on exhibit at Bibliothèque et Archives nationales du Québec (BAnQ), Raymond Klibansky (1905-2005) – La bibliothèque d'un philosophe in the Grande Bibliothèque's main exhibition hall until August 25, 2013.
WHAT:           Symposium: Meetings with Books: Raymond Klibansky, Special Collections and the Library in the 21st Century
WHEN:           Wednesday, March 20, 2013
WHERE:         Faculty Club Ballroom, McGill University, 3450 McTavish St., Montreal
* The symposium will be presented in English
Panels and lectures include:
“Remembering Raymond Klibansky”
Moderated by Isabelle Robitaille, BAnQ
Speakers: Georges Leroux, philosophy professor, Université du Québec à Montréal; curator of the exhibit Raymond Klibansky (1905-2005) – La bibliothèque d'un philosophe, presented as part ofBAnQ’s Philosophy Year
Gerald Beasley, (University Librarian, Concordia University); Désirée Park (Concordia University)
"It is all on the Web, so why bother? Special Collections in the Digital Age" Moderated by Prof. Ellen Aitken, Dean, Faculty of Religious Studies (McGill University)
Speakers: Stefan Sinclair (McGill University); Fiona Black (Dalhousie University); Leslie Howsam (University of Windsor); Lindsay Eckert (University of Toronto)
Keynote lecture by author Alberto Manguel: “The Uses of Curiosity”
Curiosity has an ambiguous reputation: on the one hand, it is viewed as a sinful emotion that leads into forbidden territories; on the other, as the necessary drive for discovery and learning. This talk will explore the roots of the paradox in Western thought and look at libraries’ special collections as one of the fruits of this double-edged desire.
Alberto Manguel is one of the world's great writers and readers. He is a member of PEN, a Guggenheim Fellow, and an Officer of the French Order of Arts and Letters. He has received numerous prizes, including the Prix Médicis in essays for A History of Reading, and the McKitterick Prize for his novel News from a Foreign Country Came. His most recent books include The Library at Night (Yale University Press). His work has been translated into more than 30 languages.
For more details and the full program of the conference, visit: https://www.mcgill.ca/library/channels/event/meetings-books-klibansky
For more details about the exhibit Raymond Klibansky (1905-2005) – La bibliothèque d'un philosophe at the BAnQ, visit: http://www.banq.qc.ca/activites/itemdetail.html?language_id=3&calItemId=75017
Attendance is free but reservations are required: rsvp.libraries [at] mcgill.ca; 514-398-4681