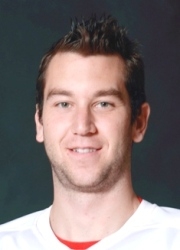 MONTREAL - McGill's Marc-André Dorion of St. Hubert, Que., and Édith Aubert-Lehoux from the Montreal Carabins, have been named by the Réseau du sport étudiant du Québec as conference's university athletes of the week for the period ending Jan. 8, 2012.

Dorion, a 5-foot-11, 185-pound defenceman with the hockey Redmen, scored four points in two victories last week and is the top-scoring rearguard in the nation with 29 points, including five goals, in 18 games. The 24-year-old physical education senior registered a pair of assists in a 3-1 victory over Ottawa last Friday, assisting on the winning goal. The next night, he tallied one goal and added an assist in a 5-2 win over Ryerson and his game-winner against the Rams was the 6,000th regular season goal in team history, dating all the way back to the first Canadian intercollegiate league in 1902.

A two-time All-Canadian who was named as the most outstanding defenceman in the CIS during his sophomore season, Dorion starred for Baie Comeau in the QMJHL and attended Collège de Baie Comeau prior to enrolling at McGill in 2008.

Aubert-Lehoux, a native of Ham-Nord, Que., scored the game-winner and added an assist in a 3-2 win over Ottawa last Friday.