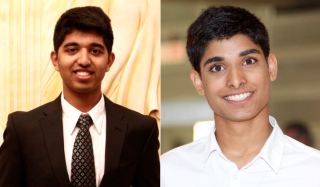 Created in 2011 by Canadian business leader and philanthropist Seymour Schulich, this annual scholarship program encourages promising high school graduates to embrace the ‘STEM’ fields – science, technology, engineering and mathematics – in their future careers. This year, there were 1,250 Schulich Leader nominees from across Canada vying for 50 new scholarships. Now in its fourth year, 170 students from across the country are Schulich Leader Scholars, and have received $11 million in support.

Alexander Deans, 18, is a recipient of the award valued at $80,000. A graduate of Academie Ste Cecile International School in Windsor, Ontario, he will be entering McGill’s engineering program this fall. Deans was selected for his outstanding academic record as well as accomplishments in youth leadership, sports and music. His extra-curricular achievements include the creation of the ‘iAid’, an revolutionary navigation device for the blind which earned the Gold Medal at the Canada Wide Science Fair and second place worldwide at the Intel International Science and Engineering Fair as well as the 2014 “Future Leaders” honour by Maclean’s Magazine.

“I really appreciate receiving a Schulich Leader Scholarship because it recognizes leadership and youth innovation, I have a passion for innovation and solving real-world problems, and McGill represents the opportunity to challenge myself at one of the world’s best universities.” -- Alexander Deans

Aditya Mohan, 18, is a recipient of the award valued at $60,000. A graduate of Colonel By Secondary School in Ottawa, Mohan will be entering McGill’s microbiology and immunology program this fall. Mohan was selected for his consistent academic excellence as well as his accomplishments in creative arts and international development aid. His extra-curricular research efforts have focused on research into the HIV virus (for which he won the 2014 Manning National Innovation Award and the 2015 Sanofi BioGenius National Challenge), algal biofuels and oncology, exploring the idea of bio- engineering the common cold virus to kill cancer cells. Aditya was recently named a Top 20 Under 20 recipient by Plan Canada.

“The Schulich Leaders Award is a big honour especially when you consider the past recipients, it means a lot to be recognized for my efforts in high school and to now have the opportunity to attend McGill.” -- Aditya Mohan

“Fostering leadership in STEM fields is vital to Canada’s economic prosperity,” said Seymour Schulich, himself a McGill graduate who has a Bachelor’s degree in Science and was a member of the University’s inaugural MBA graduating class, in 1965.

“It is immensely important to invest in the next generation of technology innovators as they develop and hone their minds and skills to contribute to our national and global community. This country has already produced exceptional Schulich Leaders since its founding in 2011. Every year, our mission is to support outstanding students in pursuit of their dreams.”

Go to bit.ly/1DGIPLd to watch a video about the impact of the Schulich Leader Scholarships at McGill.

Schulich Leader Scholarships are prestigious entrance scholarships awarded to high school graduates enrolling in a Science, Technology, Engineering or Mathematics (STEM) undergraduate program at participating universities in Canada and Israel. Recognizing the increasing importance and impact that STEM disciplines will have on the prosperity of future generations, businessman and philanthropist Seymour Schulich established this $100 million scholarship fund in 2011 to encourage our best and brightest students to be the next pioneers of global scientific research and innovation. This program awards 100 scholarships annually, valued at more than $5 million. Schulich Leaders can devote their full time and attention to their studies, as all of their financial needs are covered over the course of their degree. As a result, many of our highest potential students are winning these scholarships and will make great contributions to society.

Founded in 1821, with over 300 research programs, 39,500 students and 11 faculties, McGill University has a reputation for excellence that reaches around the globe. McGill is recognized as one of the world’s leading universities: 1st in Canada among medical-doctoral universities for ten consecutive years (Maclean’s 2015); 21st in the world (QS World University Rankings 2014/15); highest percentage of PhD students of any Canadian research university; 138 Rhodes Scholars—the most among Canadian universities; and 10 Nobel Prize winners.