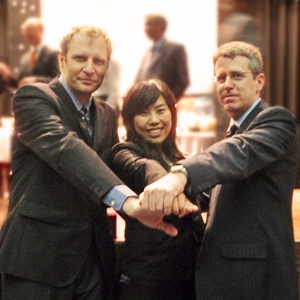 The Faculty of Law and the Institute of Air & Space Law salute LLM candidates Ondrej Fabrici, Yue Huang and Robin Holman (pictured on left). They competed against 12 teams from China, India, the Netherlands, the Russian Federation and South Korea. Their teaml placed second in the first International Air Law Moot Court competition, which was held  3-6 March 2010, in New Delhi, India.

The McGill team made it to the finals against Leiden (the Netherlands), and according to observers, it was a fight to the finish, with the audience not knowing who would win at the end of the 90 minutes of arguments. In the end, Leiden came out first, but it was a tight win.

The McGill team also received the prize for Best oralists for the respondent.