McGill, a partner for Montreal 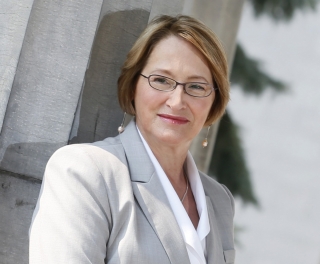 One of Suzanne Fortier’s priorities as Principal and Vice-Chancellor of McGill University is to make it a better partner for Montreal. That is one of the messages she delivered today as she spoke for the first time to the members of the Board of Trade of Metropolitan Montreal.

Universities have an increasingly important role to play in their community and in all aspects of the city’s evolution, Prof. Fortier added.

“The Université de Montréal is developing a new science campus in a former rail yard in Outremont, UQAM is an integral part of the Quartier des spectacles, Concordia is contributing to the revitalization of its neighbourhood with Quartier Concordia and the École de technologie supérieure and McGill are developing together the Quartier de l’innovation, south of downtown,” she said.

A new life for the Royal Victoria Hospital

Principal Fortier confirmed McGill’s interest in acquiring the site where the Royal Victoria Hospital currently stands (the hospital will move to the McGill University Health Centre’s new site). McGill would transform it into a teaching, research and meeting space – a « carrefour » – that would connect Quebec and the world. The urban development project would be developed in consultation with the Montreal community. It would preserve heritage buildings, offer new green spaces, as well as a new public pathway to Mount Royal from downtown.

“McGill suffers from a well-known shortage of space and few possibilities for expansion on its downtown campus. The relocation of the Royal Victoria Hospital presents a unique opportunity that we must look at closely. We are still in the early stages but if the right conditions are there, the project could be launched for the 375th anniversary of Montreal and could open to the public when McGill celebrates its 200th in 2021.”

Researchers and students at the heart of the partnership

Prof. Fortier acknowledged that it can prove complicated for companies to do business with a complex organization such as McGill. To facilitate interactions between McGill and its community, the University recently created the McGill University Business Engagement Centre (MUBEC). MUBEC is a one-stop-shop for any company wishing to seek out the expertise of McGill researchers or to hire students, a “centre that prevents you from having to find your way through the maze that a large university like ours represents,” the Principal said.

Suzanne Fortier also explained that she wants McGill to be able to offer all undergraduate students an opportunity to challenge themselves through experiential learning, whether through an internship, international exchange or undergraduate research experience. “We want to create an educational experience that is distinct, innovative and rewarding. We are calling this the McGill commitment”.

As part of this commitment, the Principal also wants to give graduate students and post-doctoral fellows the opportunity to earn a graduate certificate – in management or in university teaching, for example -- that will help prepare them for the job market.

Principal Fortier concluded by reiterating McGill’s commitment to help Montreal thrive. “Montreal has all it needs to ensure its success. Let’s develop a winning attitude and take action. Montreal can count on me and on McGill. “