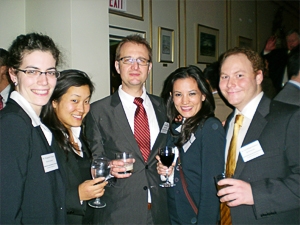 Marguerite Tinawi, Seo Yun Yang, Lauren Chang MacLean and Guy-Philippe Bouchard (left to right on photo, with Prof. Moyse at centre) took two of the top four spots at the Harold J. Fox Moot, which was held on February 19 and 20, 2009 competition at the Federal Court in Toronto . They were enthusiastically and ably coached by Stefan Martin of FMC, Patrick Goudreau and Larry Markowitz of McMillan, Laurent Carrière of Leger Robic Richard and Professor Pierre-Emmanuel Moyse of the Faculty of Law.

After two preliminary rounds, two of the four (out of 14) remaining teams were from McGill. The exciting semi-final round featured the McGill appellant team (Lauren Chang MacLean and Guy-Philippe Bouchard) pitted against the McGill respondent team (Marguerite Tinawi and Seo Yun Yang) and was heard by Ontario Court of Appeal Justices Cronk, Gouge and Feldman.

The McGill appellant team of Chang MacLean and Bouchard made it to the final round, and pleaded before Judges Rothstein of the Supreme Court, Sexton of the Federal Court of Appeal and Hughes of the Federal Court. The team placed second, losing in a close 2-1 split decision (Hughes dissenting).

Professor Pierre-Emmanuel Moyse reported that the McGill team was “exciting and eloquent” and that they “stole the public’s heart”. He added that, “having our two teams in the last quarter impressed many people.”

The Faculty of Law extends its warmest congratulations to the team!