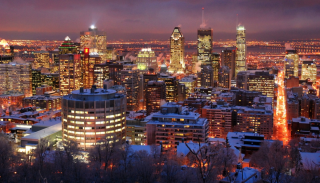 McGill and Montreal have a shared history that goes back to 1821. And so, as the Montreal community mobilizes around Je vois MTL to kick off a new era for the metropolitan area, McGill is eager to answer the call. The rally to be held on Monday, November 17, 2014, will see two projects waving the McGill flag, along with ten or more other projects.

The Centre for Interdisciplinary Research on Montreal (CIRM) is the first research initiative of its kind, bringing together some 30 researchers from McGill, the INRS, UQAM, the Université de Montréal, Concordia and Laval in a wide range of disciplines, ranging from music and architecture to economics and law, among many others – all together under the Montreal banner.

Says CIRM Director Pascal Brissette, “If Montreal is a university city – and that is certainly the case – this city needs a centre like the CIRM, which is working to bring together all the strengths of academic research and turn our combined knowledge of this city into projects for Montreal.” On Monday, Professor Brissette will attempt to convince the partners to provide financial support for the CIRM to set up an interactive website where Montrealers from all backgrounds can share and exchange their ideas and concrete projects for Montreal with experts from the universities.

The second project, A passion for science in the Quartier de l’Innovation, is headed by McGill Principal Suzanne Fortier with two co-leaders, astronaut and CEO of the Montreal Science Centre, Julie Payette and Pierre Dumouchel, Director General of the École de Technologie supérieure. The aim is not only to encourage kids to take an interest in science from a very early age, but also to keep students in school. Professor Fortier, a scientist herself, has made a personal commitment to the project. “I am convinced that helping children to discover the world of science when they’re very young gives them an interest in learning so they will like school. As a society, we cannot let all that talent go to waste. Our future depends on it.”

Follow us on social media @mcgillu and @mcgillGR all day Monday and share our progress on these projects we care about.