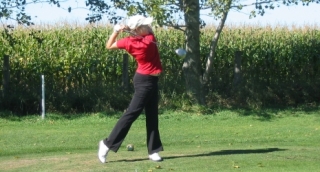 The two-day 36-hole tourney will feature 90 golfers from 12 Quebec universities vying for both individual and team titles. Sixty men and 30 women will tee it up on Sunday on the picturesque and challenging valley course that Graham Cooke, the world renowned golf course architect, considers to be one of his finest designs.

This event is the second leg of a four-tournament Quebec university circuit that will crown both individual and team champions. The top three men's and top two women's teams will gain automatic entry into the 2012 Golf Canada/ CIS University and College championships to be played in late May at Victoria, BC.

Laval currently leads the men's team competition with a three-shot lead over the Montreal Carabins. McGill sits in fifth position, seven shots behind Sherbrooke and 11 in arrears of third-place UQTR. On the women's side, Laval leads Montreal by 29 shots with McGill in third, only five shots behind Montreal.

The men's individual leader is Montreal's J.P. Cornellier who leads Charles Cote of Laval by a single shot and is three shots up on Laval's Sonny Michaud. Cornellier is six-under par after 36 holes.

McGill's Brian Neill is tied for 15th and sits 12 shots behind, after shooting rounds of 77 and 75 on the par-73 Milby course last week. Teammate Yannick Schuwey is in 17th, one shot behind Neill.

The women's division leader is Laurence Mignault of the Montreal Carabins with a total of 152, a one-shot lead over Sabrina Sapone of Laval and a three shot lead over third place Virginie Boulianne, also of Laval. McGill's Dayvi Khanna fourth at 160.

Under par rounds are anticipated by many of the top players this weekend and the team and individual competition are expected to be extremely close.

After this weekend, the third segment of the RSEQ university golf circuit, hosted by UQAM, will be played at the Irish course of the Ile de Montreal Club, Sept. 21-22.