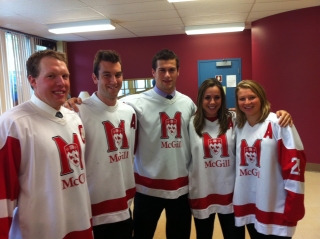 MONTREAL -- Members of the McGill University Redmen and Martlets hockey teams were on hand before a packed gymnasium of elementary school students at Lauren Hill Academy in St. Laurent, Que., Wednesday, to launch a "Stay in School" campaign, in conjunction with that of the and Lester B. Pearson and English Montreal school boards.

The Redmen will be playing a regular season OUA hockey game against the Royal Military College Paladins, before more than 3,000 students from both school boards, which will take place on Dec. 2 at the Verdun Auditorium (10:30 a.m.) and that event will be part of unique school field-trip coordinated by Rooths Sports Events.

The contest, which was originally scheduled for Nov. 18, will be the first morning game in the 132-year history of the McGill men's program.

Rooths president Martin Routhier, a former captain of the Redmen, is producing the event, which is a reincarnation of the "Score with School" program that he introduced while serving as president of the QMJHL's Montreal Juniors. In the coming weeks, McGill players will visit local schools to illustrate the importance of focusing on education and striving for a university degree.

A number of prominent local athletes, including McGill grad Mathieu Darche, currently in his third season with the Montreal Canadiens, and former Montreal Alouettes player Steve Charbonneau, have committed to serve as spokesmen to reinforce the importance of education.