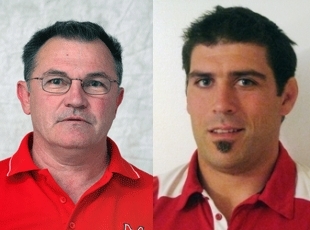 John Lavery (right) takes over from Vince deGrandpré, who steps down after 14 seasons as head coach of the rugby Martlets

MONTREAL -- Vince deGrandpré has stepped down as head coach of the McGill University women's rugby team after serving in that capacity for the past 14 years. He has been replaced by John Lavery, a resident of Ste. Anne de Bellevue, Que., who has been elevated to bench boss after spending the past four seasons as the Martlets forwards coach.

During his long tenure, DeGrandpré posted a 115-42-2 overall record, including a 74-13-2 mark in regular season play. He had been involved with the program dating back to 1991, took over the head coaching reins in 1998, led the Martlets to eight consecutive Quebec league titles and as many appearances at the CIS championship tournament. He was twice voted conference coach of the year (2002, 2004) and earned CIS coach-of-the-year honours in 2004.

Lavery, a 36-year-old originally from Lachine, Que., is also employed as an integrity officer at Centennial College in Montreal's NDG region. He has been coaching rugby for the past five years. He also served as a forwards coach with the Ste. Anne de Bellevue men's club (SABRFC) as well as being a shadow coach (a professional development program) with Rugby Quebec, working with the senior men's team, as well as the U-19 and U-17 clubs.

After playing for John Abbott College, Lavery went on to a stand-out career at Trent University in Peterborough, Ont., where he was named Team MVP in 1998 and graduated in 2003. He later played as a prop for SABRFC and captained the Quebec Caribou RFC.

"Our core of returning players is a very strong and positive group," says Lavery, who expects about 23 freshmen when training camp opens in mid-August. "There's plenty of talent and leadership there and the challenge now is to channel that into a productive training camp. We anticipate having a large turnout with some good depth that will hopefully carry us through what is sure to be a challenging season."