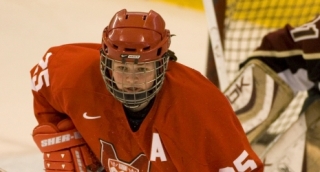 NIAGARA FALL, Ont -- Vanessa Davidson, a McGill University grad from Beaconsfield, Que., scored midway through the second period with what proved to be the winner as the Montreal Stars captured their second straight Clarkson Cup title as champs of the Canadian Women's Hockey League, with a 4-2 victory over Brampton on Sunday.

Alyssa Cecere, another former member of the McGill Martlets also scored for Montreal. Rounding out their scoring was Emmanuelle Blais and Caroline Ouellette, who was named tournament MVP.

Former Governor General Adrienne Clarkson, whom the Cup is named after, presented the winning trophy to the Stars after the final in Niagara Falls.

Courtney Birchard and Cherie Piper each scored in the third period for Brampton.

After a scoreless first period, Montreal got on the board 23 seconds into the second when Cecere fired a shot past Brampton goalie Liz Knox.

Ouellette made it 2-0 at the four-minute mark when she converted on a nifty setup pass from Sabrina Harbec on a 2-on-1 break.

Blais cemented the victory on a marker with seven minutes to play.

Four players from the Stars will take part in the Canadian selection camp for the 2012 IIHF World championships: Ouellette, Meghan Agosta, McGill grad Catherine Ward and Blais. Players will report to camp Monday night in Ottawa.

Molly Engstrom hopes to earn a roster spot with the U.S.