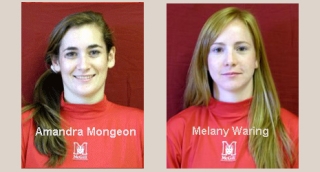 Mongeon, a 5-foot-10 flanker, was selected for the third consecutive year. The 21-year-old arts and science junior previously played for the Canadian under-20 team.

Waring is a 5-foot-2 scrum-half, who also earned all-star honours in 2007. She is a 25-year-old senior, majoring in health and education.

The Stingers travel to Ste. Foy, Que. to meet the Laval Rouge et Or in the conference championship game on Saturday at 1 p.m.

PLAYER OF THE YEAR AWARD

ROOKIE OF THE YEAR AWARD

COACH OF THE YEAR AWARD