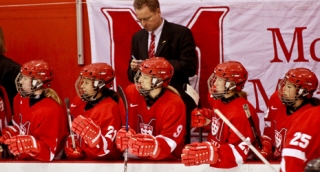 ANTIGONISH, N.S. – The No. 1-seeded McGill Martlets will get a chance to defend their CIS women’s hockey national title in the wake of a convincing 5-1 win over the tournament host St. Francis Xavier X-Women, Saturday night, in front of a full house of 1,740 at the Keating Millennium Centre.

Sophomore Ann-Sophie Bettez of Sept-Iles, Que., and freshman Marie-Andrée Leclerc-Auger of Sherbrooke, Que., both recipients of CIS rookie-of-the-year honours over the past two seasons, each scored one goal and added a pair of helpers as McGill racked up their 53rd consecutive conquest over a CIS opponent.

The Martlets advanced to the gold medal game, Sunday night, for the third straight year. McGill (2-0) will take on the second-seeded Laurier Golden Hawks (2-0) in a rematch of last year’s final, which ended up as a 2-0 victory for the Martlets. The game, which is scheduled for 7 pm Eastern, will be televised on THE SCORE, tape-delayed beginning at 9 pm Eastern.

“We were sharp today and it was an all-round solid effort,” said McGill head coach Peter Smith. “Everyone brought a lot of energy and we really pressed X in their zone and wore them down with relentless forechecking. I liked our start but we got a way from our game a little in the second period, taking four straight penalties and turning the puck over, which slowed us down. We really did a good job of picking up the pace in the third.”

McGill, which led St.FX 2-0 after one period and 3-1 after two, had a 36-15 margin in shots. Goaltender Charline Labonté, the Olympic gold medalist from Boisbriand, Que., registered her 13th consecutive victory in post-season play and has seven wins in eight starts at the Nationals. Labonté, who posted back-to-back-to-back shutouts at last year's championship, has been beaten only twice in this tournament, kicking aside 32 of 34 shots.

Katie Harvieux of Digby, N.S., made 31 saves in a losing cause as the X-Women fell to 0-2 and will play Ottawa (0-2) for fifth-place Sunday.

Senior Vanessa Davidson of Kirkland, Que., who tallied the overtime winner in Thursday's 2-1 victory over Manitoba, opened the scoring for McGill, connecting on a power play at the 2:09 mark. She pounced on a second rebound, following shots from snipers Bettez and Leclerc-Auger, and fired a wristshot into the top left corner.

“I’m pretty lucky,” said Davidson, who was playing her 160th game and ranks as McGill’s all-time leader in goals (122), assists (120) and points (242). “They’re two phenomenal players and make it easier to play. All three of us know where were going to be (on the ice) and it’s been great playing with them this season.”

Sophomore Jordanna Peroff of Keswick, Ont., was credited with the game-winner 10 minutes later, to make it 2-0. She raced up the middle lane, took a shot that was blocked by blueliner Marilynn Hay and was alert enough to pick up the rebound and put it between Harvieux’s legs.

Cathy Chartrand, a 5-foot-10 rearguard from Lac Nominingue, Que., who was named player of the game for the Martlets, converted a nifty give-and-go play with Calgary native Alessandra Kind-Kenny, to one-time a shot past Hervieux midway through the second period and give the Martlets a commanding 3-0 lead. It was the 19th marker of the season overall for Chartrand, who added to her McGill single-season record for most goals by a defenceman. The previous mark was 16 by Catherine Ward, during her CIS rookie-of-the-year campaign in 2006-07.

“I thought I had room to skate with the puck but an X player (got in the way), so I just chipped it ahead because I saw someone (Lind-Kenny) coming off the bench,” said Chartrand, last year's CIS championship MVP. “From there, I called for the puck and she passed it across... I just shot it off the pass and it went in.”

Freshman Erin Brophy of Antigonish was named the X-Women player of the game. She was the only player who was able to put one past Labonté, deflecting a Hay point shot during a 5-on-3 power-play.

Bettez restored McGill's three-goal advantage 5:22 into the third frame during a power play, and Leclerc-Auger closed things out tapping in a rebound with only two seconds left in the game. It was her team-leading 46th of the season, a school record.

“They’re hard to play against,” said St.FX captain Brayden Ferguson, who was voted CIS player of the year last season. “It was really tough back there (in the defensive zone), they forechecked like crazy and they’re a very tough team.”

McGill controlled the Pool A finale from start to finish, dominating in shots on net by 16-4 in the opening period, 9-4 in the middle stanza and 11-7 in the third frame for a final count of 36-15.

PLAYERS OF THE GAME: