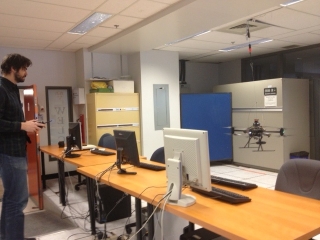 The danger that icebergs represent to both shipping and to the underwater cables that traverse the ocean floors is very real. It’s tricky for satellites to identify icebergs, and almost impossible to accurately predict the level of risk they present. Drifting clouds can make it difficult to see the movements of sea ice as well as the underwater shape of the icebergs that determines their movement and whether they are a threat. This is why ships moving off Newfoundland’s Grand Banks and the coast of Labrador are asked to report their position and ice observation to Ice St. John’s every six hours.

But one of the goals of the newly formed NSERC Canadian Field Robotics Network (NCFRN), led by McGill University Computer Science professor Gregory Dudek, is to find ways to solve this problem by using robots to monitor both the above ground and underwater dimensions of icebergs. This is just one of many applications made possible by this network, which will develop robotic tools that will not only enhance our ability to measure and understand the Canadian environment, but will advance planetary exploration as well.

The Honourable Gary Goodyear, Minister of State (Science and Technology), speaking at McGill University earlier this morning, announced a grant of $5 million for the NSERC Canadian Field Robotics Network through the Natural Sciences and Engineering Research Council of Canada (NSERC) Strategic Network Program funded by Industry Canada. The NCFRN will receive another $5 million in research support, approximately, in the form of direct in-kind exchanges of services and direct financial contributions from industrial and government partners. Minister Goodyear also announced a further $1.3 million coming to researchers at McGill University over the next five years through NSERC’s Strategic Partnership Grants to support nine projects in a range of fields.

“Our government’s number one priority is prosperity and that means jobs and economic growth,” said Minister Goodyear. “Fostering a strong research environment and supporting partnerships like these are necessary to sustain a modern competitive economy. This funding will help companies increase their Research and Development activities in Canada by leveraging the expertise and knowledge of Canadian researchers right from the early stage of research, through to large scale networks.”

The NCFRN will bring together the talents of field robotics researchers from across the country who work with robots that either interact with human beings, or move on land, in the air, or in water. The goal of the network is to pool knowledge and act as a catalyst for the development of integrated robotic applications to make smarter devices, where land-based robots “talk” to swimming robots and/or airborne robots, depending on the situation.

Applications range from environmental monitoring around Canada’s extensive coastlines– including in the far North, where harsh conditions make human research complicated and costly – to mining and resource identification, planetary exploration, pipeline monitoring, border surveillance, search and rescue, and even dealing with environmental disasters such as nuclear accidents. Smart wheelchairs, with voice activated control and arms that can grasp objects, are also in development and rely on similar technologies to identify objects and navigate through space. In addition, the network will train students who can bring elements of robotics technologies to many industries that are not currently using robots.

McGill University’s Prof. Dudek, the scientific director of NCFRN, is excited by the prospect of the work that lies ahead and confident that this is the right group of people to be doing it. “We have created a very ambitious program for ourselves, but this group combines the best people working in field robotics in industry, in the universities and in government, and I’ve no doubt that we will be able to work together to build a suite of shared tools to bring new concepts and technologies to fruition.”

“I would like to thank the Government of Canada, NSERC, and our industrial partners for their support for this important robotics research network,” said Prof. Heather Munroe-Blum, McGill Principal and Vice-Chancellor. “McGill’s innovation and excellence in this field depends on such strategic funding, which supports researchers in developing intersectoral, international collaborations, and broadens the impact of their cutting-edge research, regionally, nationally and globally.”