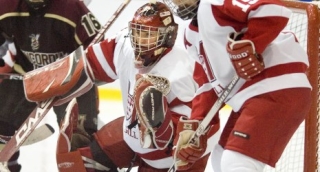 GUELPH, Ont. - Goaltender Charline Labonte kicked aside 20 shots and registered her 54th career shutout for McGill as the visiting Martlets blanked Guelph 3-0 in women's hockey at the Gryphon Centre, Sunday, improving their preseason record to 2-0.

Labonte, who was on sabbatical last year to help Canada win gold at the Vancouver Olympics, improved her career record to 107-9-3 overall in a McGill uniform.

The Martlets, who held a 32-20 edge in shots, got goals from three different players, including what proved to be the game-winner at 13:53 on the opening period on a power-play goal tipped in by freshman forward Leslie Oles of Beaconsfield, Que.

McGill netted another power-play goal early in the middle frame, with Guelph already killing one penalty and about to be assessed another. Rookie Katia Clement-Heydra of St. Bruno de Montarville, Que., jumped on a juicy rebound and fired the puck past rookie netminder Brooke Siddal.  Less than five minutes later McGill struck again with a nice tip-in by All-Canadian sniper Ann-Sophie Bettez of Sept-Iles, Que., on a play that developed from a two-on-one with Clement-Heydra and sophomore Kim Ton-That of Beaconsfield, Que.

Siddal was saddled with the loss, allowing three goals on 12 shots, before being replaced midway through the game by veteran Danielle Skoufranis, who blanked the Martlets the rest of the way.

McGill will head south of the border for their next five games. They are slated to play twice against Providence College in Providence, R.I., Sept. 24-25, followed by a game at Northeastern University in Boston, Mass., Sept. 26. The following weekend, the Martlets will play at St. Lawrence and Vermont.