Labonté and Bernard named McGill athletes of the week 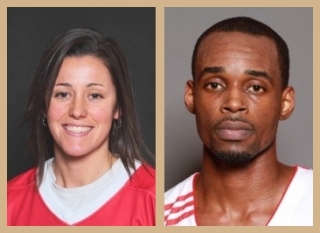 MONTREAL - Charline Labonté of Boisbriand, Que., and Kyle Bernard of LaSalle, Que., are the McGill University athletes of the week for the period ending Jan.2, 2011.

Labonté, a 5-foot-8, all-Canadian goaltender with the top-ranked hockey Martlets, chalked up three victories, two of them via shutout, and posted a stingy 0.67 goals-against average with a stellar .952 save percentage as McGill swept all three games at the Bisons Holiday Classic tournament in Winnipeg, Dec. 28-31. The 28-year-old physical education senior kicked aside 40 of 42 shots faced and posted goose-eggs over No.4-ranked Manitoba and No.5-Alberta. Labonté, who helped Canada win gold in each of the last two Winter Olympic Games, owns an overall 119-9-3 lifetime record with 59 shutouts in 131 career games with the Martlets. Prior to joining McGill, she graduated College Lionel-Groulx in 2005.

Bernard, a 6-foot-4, 180-pound forward with the basketball Redmen, scored 43 points and grabbed eight rebounds in 64 minutes of court time over three games at the UQAM Holiday Classic tournament, Dec. 28-30. The 23-year-old sociology senior, in his second year of eligibility with the team, shot a solid 48.5 per cent from the field (16-for-33) and a stellar 87.5 from the foul-line (7-for-8). He went 4-for-7 from three-point range, grabbed eight rebounds and had a couple of steals. Bernard, who dropped in a career-high 27 points in a 91-79 win over Memorial on Dec. 30, enrolled at McGill after graduating from John Abbott College in 2007.