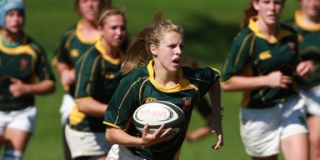 The undefeated Martlets, who are tied with Laval (2-0) atop the Quebec conference standings, have outscored opponents 109-0 after two games.

Emily Barber, a 17-year-old freshman from Fenelon Falls, Ont., registered a pair of tries and Katelyn McKellar of Elgin, Que., added another.

"Brianna continues to show that she can break free to score. She is a very slippery player to stop," said McGill head coach Vince deGrandpre. "And waht can I say about Emily other than she's been a terrific addition to the team. One of the youngest players in the CIS, she is playing very well despite playing on our front row and out of her natural position. She is a seriously tough player."

Next on tap for the Martlets is undefeated Laval (2-0), who play at McGill's West Island campus on Sept. 25.