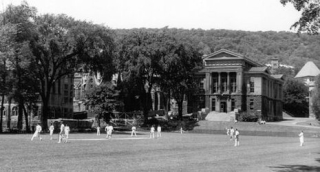 (PHOTO OF CRICKET BEING PLAYED ON THE McGILL CAMPUS, CIRCA 1907; COURTESY OLD McGILL YEARBOOK)

MONTREAL -- The McGill University cricket club has been around, on and off,  since the late 1800s, but this year for the first time, it has gained official "club sport" status on campus. The sport has historic roots and was popular before the first organized game of ice hockey in 1875. Early ice hockey goalies used cricket pads for protection.

Historical records do not divulge when cricket was first played in Canada, but it is generally assumed that the game was introduced into the country by British soldiers following the historic battle at the Plains of Abraham near Quebec City, between the armies of General Wolfe and General Montcalm in 1759.

By the time Canada became a nation in 1867, the game was so popular it was declared the national sport of the fledgling country by the first Prime Minister, Sir John A. Macdonald and his colleagues, according to Canadian cricket historian Donald King in the columns of The Canadian Cricketer in April 1973.

"Cricket is one of the fastest growing sports in Canada, and in recent years it has taken big strides as a university sport in North America," says Muhammad Tayyab Zafar, president of the new McGill club.

The team was chosen through competitive tryouts and has over 200 supporters on Facebook. In early September, the team competed at an intercollegiate tournament in Toronto and a few weeks later, they took on arch-rival Queen's at Raymond Park, located at the intersection of Bishop-Power and George Street.

"It's was our biggest event of the year," said Zafar. "We had lots of fans from both schools and the T-shirt and samosa (stuffed pastry) sales helped cover costs."

For sports enthusiasts new to cricket, the game most closely resembles baseball. However, there are - count them - 11 different ways to get out in cricket and batters hit the ball (thrown or "bowled" at over 100 kilometres per hour) while moving with a tennis-like swing. With many ways to score a run, points are constantly changing, adding to the excitement of the game.

Cricket is a mad phenomenon in countries like Pakistan, India, South Africa, and England. While the game originated with British royalty, it soon spread across the world and can be played with even simple equipment. On sunny days, you may see the McGill cricket club playing on the lower field with tennis balls, a bat, and field markers.

"I grew up with cricket, everybody played it...I love the excitement, the thrill of cricket...even when I do my homework, I'm following cricket games," said Zafar. "It's addictive!"