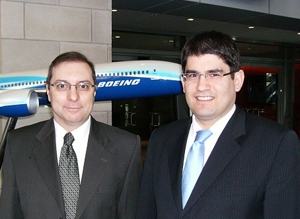 Boeing Fellow Norberto Luongo (on left) and Alejandro Piera (on right), both DCL candidates attached to the Institute of Air and Space Law at McGill University, have won the first prize in a prestigious air law international contest.

Mr. Piera and Mr. Luongo co-authored a thorough academic research submitted to the 2009 Edition of the International Contest on Air and Space Law organized by, the Latin-American Air and Space Law Association (ALADA). The work, entitled Legacy Carriers and Low-Cost Carriers. Relations, Differences and Development Forecast, was unanimously awarded the First Prize by a Jury composed of three of the most prestigious international academics in Air Law in Latin-America. The distinction includes also a significant monetary prize.

Mr. Luongo's research activity focuses on a number of varied topics, including air carrier liability, government programs providing air service to smaller and remote communities, air transportation security, airport regulation, Passengers' Bill of Rights, and the rights of disabled people in air transportation. Mr. Luongo has written a dozen of leading articles published in Canada, Europe and Latin-America, and is the author of a comprehensive treatise on air carrier liability.

The Faculty of Law and the Institute of Air and Space Law offer Alejandro Piera and Norberto Luongo their warmest congratulations.

About ALADA and the contest

The Latin-American Air and Space Law Association (ALADA), which is entering its 50th year of life, is a non-governmental academic association, leading the air law community in Latin-America. It has also a solid international reputation, including a seat as observer in the International Civil Aviation Organization (ICAO). The International Contest on Air and Space Law is organized by ALADA every year, and it is recognized as one of the most prestigious in this field in the Spanish-speaking community, due to its rigorous candidates selecting process, the high academic level of the papers thereto submitted, and the eminent and illustrious members of the international academic Jury that evaluates the competing presentations.