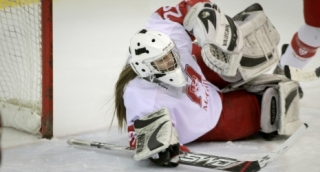 BOSTON, Mass. -- Senior forward Kristi Kehoe scored on the power-play at 1:29 of sudden-death overtime to propel Northeastern University to a 3-2 victory over the McGill Martlets in women's preseason hockey, Sunday.

With McGill rearguard Cathy Chartand in the box for hooking, freshman forward Sonia St. Martin took the puck in her defensive zone and passed it up the left wing to Rachel Llanes. Llanes then found Kehoe, who ripped a shot over sophomore goaltender Taylor Salisbury's glove for the dramatic win. Salisbury ended up with 36 saves in a losing cause.

The first period was scoreless as each team mustered nine shots on goal but both goaltenders stood strong. Northeastern junior Florence Schelling was forced to turn aside a breakaway late in the period.

McGill broke the goose-egg early in the second period,  when freshman Adrienne Crampton tipped a Darragh Hamilton shot home at 1:48.

Northeastern responded 10 minutes later with a pair of quick goals, taking advantage of a roughing minor to McGill's Stacie Tardif. On the ensuing faceoff, Llanes won the puck back to freshman forward Katie MacSorley who roofed a shot over Salisbury to tie the game, 1-1 at 11:29.

Senior Leah Sulyma relieved Schelling in the Huskies net midway through the second period and blanked the Martlets for the remainder of the period.

McGill tied the score at 6:34 of the third period when Alyssa Cecere netted a goal after receiving a nice feed from Chelsea Saunders.

Sulyma made seven saves and earned the win.

The Martlets dropped to 2-3 overall, including three straight road losses to NCAA opponents. The will return stateside next weekend with games at St. Lawrence and Vermont, Oct. 1-2, respectively. The regular season opens on Oct. 8, with Concordia visiting McConnell Arena.

Northeastern will travel up highway I-90 next weekend to begin its regular season, as the Huskies will take on the Syracuse Orange on Friday, Oct. 1.