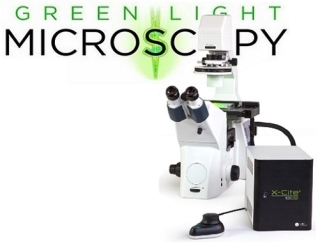 In times of environmental decline, scientific innovation must be implemented to replace old and inefficient technology. This can lead to positive academic, economic and environmental impacts. Fluorescence microscopy is a key element in many aspects of research throughout the physical, life and health sciences. Microscopes are found in virtually all research institutes, universities, hospitals, biotechnology companies and pharmaceutical companies. Mercury arc lamps have been a ubiquitous light source in fluorescence microscopy due to their compatibility with many standard fluorophores and the fact they are brighter than their incandescent counterparts. Despite these advantages, these light sources also present several pitfalls that can be remedied through alternative, modern light sources such as solid state light-emitting diodes. Green Light Microscopy (GLM) is an awareness campaign founded through the McGill University Advanced Bio-Imaging Facility (ABIF), the Cell Imaging and Analysis Network (CIAN) and the Montreal Neurological Institute (MNI) microscopy core facility. GLM aims to educate and encourage researchers to purchase new LED illumination sources or replace older mercury based technologies

The ABIF has invested in new LED light sources for all the microscopes currently in use. Most recently this October (2015), five more LED light sources were added to the remaining instruments in the facility that were lacking sustainable illumination sources. Every McGill researcher that is purchasing a fluorescence based microscope should be purchasing a mercury free solution. However, at this time, applications requiring UV excitation (<370 nm light) still require the use of mercury based technologies.

Learn more about the Green Light Microscopy campaign here and learn about all the benefits of using LED light sources for environmental, economical, and academic reasons.