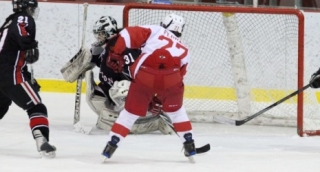 MONTREAL -- Gillian Ferrari, a former national team defenceman from Thornhill, Ont., scored the game-winner at 17:21 of the first period as the McGill Martlets blanked Carleton 1-0 in the Quebec university women's hockey playoffs to open their best-of-three semifinal series at McConnell Arena, Wednesday.

It was McGill's 102nd consecutive win against a Quebec conference opponent as the Martlets improved to 57-0-1 lifetime against Carleton. It also marked McGill's 18th consecutive playoff victory in the Quebec league since a 2-1 loss at Ottawa, March 3, 2006.

Veteran goalie Charline Labonte of Boisbriand, Que., made 21 saves to earn her 65th career shutout in 142 games overall for the Martlets.

Ravens netminder Victoria Powers, a freshman from Ajax, Ont., made 48 saves in a losing cause.

"Powers played her angles real well and as a result, a lot of our shots seemed to just hit her," said McGill head coach Peter Smith, who was named a day earlier as the conference coach of the year. "She controlled the rebounds and we were unable to get a lot of second chances. That said, I was happy with our effort. We were solid in all three zones and created a lot of scoring opportunities but couldn't find the back of the net. That's happens sometimes in the playoffs."

On the winning goal, Katia Clement-Heydra, a freshman from Mississauga and veteran Ann-Sophie Bettez of Sept-Iles, Que., worked a three-way passing play to find Ferrari at the blueline. The 5-foot-8 rearguard waltzed in along the left-side boards and cut in sharply along the goal line, firing a shot on Powers, before converting her own rebound. She also hit a goal-post and had a number of other scoring opportunities.

"She was great tonight, created lots of chances and worked well with (defence partner) Cathy Chartrand," said Smith. "We had good leadership from those two on our back end."

Game 2 of the series will be at the Carleton Ice House on Friday at 3:30 p.m. and the game is slated to be webcast on SSN at www.ssncanada.ca

If a rubber match is needed, it is scheduled for McConnell Arena on Sunday at 2 p.m.