Evolution to the rescue 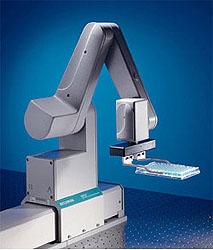 Evolution is usually thought to be a very slow process, something that happens over many generations, thanks to adaptive mutations. But environmental change due to things like climate change, habitat destruction, pollution, etc. is happening very fast. There are just two options for species of all kinds: either adapt to environmental change or become extinct.

So, according to McGill biology professor, Andrew Gonzalez, the question arises, "Can evolution happen quickly enough to help a species survive?" The answer, according to his most recent study, published in Science, is a resounding yes.

By using a long-armed robot working 24/7 over a period of several of months, McGill Professors Graham Bell and Gonzalez were able to track the fate of over 2000 populations of baker's yeast for many generations. Yeast was chosen for the experiment because a lot is known about the genetic makeup of this model organism and because it can reproduce in a matter of hours. Bell and Gonzalez used the robot to submit different yeast populations to varying degrees of environmental stress in the form of salt and so study evolutionary rescue, which is the ability of a population to adapt rapidly through evolution, in real time.

What they observed was that the likelihood of evolutionary rescue depended on the severity and rate of change of the environment and the degree of prior exposure of populations to the environmental stressor (salt). The degree of isolation from neighboring populations also affected the capacity of the yeast populations to adapt through the accumulation of beneficial mutations. For more a more detailed description of the findings see below.*

Gonzalez and his team were in effect watching evolution at work. And what they discovered is that it can happen surprisingly fast, within 50 - 100 generations.

"The same general processes are occurring whether it's yeast ormammals," said Gonzalez. "At the end of the day we can't do the experiment with a panda or a moose, for example, because the time it would take to study their evolution is far longer than the time we have given the current rate of environmental change. At some point we have to work at the level of a model and satisfy ourselves that the basic reality we capture is sufficient to extrapolate from." While there has been theoretical work on the subject done in the past, this is the first time anyone has done a practical experiment of this kind, and shown evolutionary rescue at work.

*More detailed information about the findings*

Bell and Gonzalez discovered that a population was more likely to adapt quickly through evolutionary rescue if:

1 - There was slow environmental deterioration, i.e. a slow increase in the concentration of salt, along with modest levels of contact with other populations. These populations were then able to adapt to environmental stress that would have been sufficient to eradicate their ancestors.

2 - It was connected by dispersal, i.e. had previous contact, with another population that had already experienced environmental change. This population then had a much greater probability of avoiding extinction after a rapid and severe perturbation.

The research was funded by Canadian Foundation for Innovation, the Canada Research Chair Program and the Natural Sciences and Engineering Research Council of Canada.