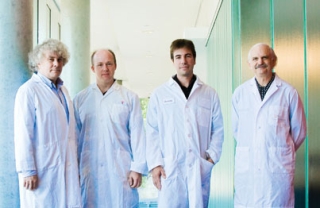 Discovery is first gene known to affect how insulin works, not how it is produced

A breakthrough by an international team of researchers in Canada, France, the UK and Denmark has uncovered a new gene  that could lead  to better treatment of type 2 diabetes, as well as a better understanding of how this widespread disease develops.

Unlike most of the genes that have been shown to cause diabetes, the new gene, called Insulin Receptor Substrate 1 (IRS1), doesn't affect how insulin is created in the pancreas, but rather, how the body responds to insulin already in the bloodstream, say the researchers, whose work will be published in Nature Genetics Sept. 6.

"Most of the genes that we've identified as diabetes risk genes to date reduce the function of the pancreas, specifically of beta cells in the pancreas that make insulin," explained Dr. Robert Sladek of McGill University and the Génome Québec Innovation Centre in Montreal, a corresponding author of the paper. "IRS1 has to do with the function of the other tissues in the body. Rather than reduce production of insulin, this gene reduces the effect of insulin in muscles, liver and fat, a process called insulin resistance."

Insulin, a hormone produced in the pancreas, enables the body's cells to absorb glucose from food and turn it into energy. Different types of diabetes are caused by the body's inability to produce sufficient insulin, inability to use its own insulin properly, or a combination of both factors.

"IRS1 is the first inside the cell that gets activated by insulin," Sladek continued. "It basically tells the rest of the cell, 'hey, insulin is here, start taking in glucose from the blood!' If IRS1 doesn't work, the whole process is disrupted."

The research was conducted by an international team including Sladek, Dr. Constantin Polychronakos of McGill's Faculty of Medicine; Dr. Philippe Froguel of the CNRS and Lille 2 University in France and Imperial College London;  Dr. Oluf Pedersen of the University of Copenhagen and Aarhus University in Denmark and their colleagues at many institutions across Europe and North America.

This study, which used genetic material drawn from more than 6,000 French participants divided into two separate groups, represents the final step in a series of collaborations between these researchers that has redrawn our understanding of diabetes genetics. In this instance, not only did the researchers pinpoint a new diabetes-linked gene, they found the genetic trigger, which leads to malfunction, in a totally unexpected place.

"It's a single-nucleotide polymorphism (SNP, pronounced 'snip'), a single letter change in your DNA," said Sladek. "What's interesting about this particular SNP is that it's not linked genetically to the IRS1 gene in any way; it's about half-a-million base-pairs away, in the middle of a genetic desert with no known genes nearby. In genetic terms, it's halfway from Montreal to Halifax. And yet we can see that it causes a 40-per-cent reduction in the IRS1 gene, and even more important, a 40-per-cent reduction in its activity. Which means that even if insulin is present, it won't work."

"We would like to congratulate Rob Sladek and his group for this breakthrough discovery. His work on the genetic basis of type 2 diabetes will certainly have an impact in the way clinicians diagnose and treat diabetes patients and is paving the way for translational research and personalized medicine," said Catalina Lopez-Correa, Vice-president of Scientific Affairs at Génome Québec. She added, "This discovery once again confirms the scientific excellence and talent of Québec's scientists and the key role that genomics is playing in the study and treatment of complex diseases."

Sladek hopes this discovery may lead to new therapeutic lines of attack in the future.

"It's possible that in diabetic patients, the signal to turn this gene on and off might be impaired. But we might be able to use one of the other pathways to turn it on," he said.