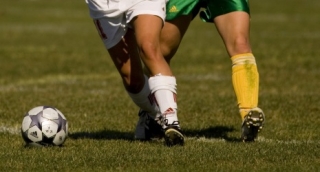 Freshman Sophia Horricks, a 5-foot-7 forward from Vancouver, B.C., iced the contest with her goal in the 77th minute.

"Di Caprio scored two beautiful goals at key points in the game," said Marc Mounicot, head coach of the Martlets. "She need a boost to her confidence and this should help. She fits in well with Alexandra (Morin-Boucher), our other striker."

McGill had huge territorial advantage with 16 attempted shots compared to five by the Golden Gaels, including a 13-3 margin on net.

"It was a great weekend for us, beating two of the top teams in the Ontario conference," added Mounicot. "We asked the team for two strong tactical performances and solid defensive work and that's exactly what we got with two shutouts. Our backline was faultless with  (Katherine) Green, (Elizabeth) Williams and (Kathleen) Wakeling."

The Martlets, improved their preseason undefeated streak to 3-0-1 against CIS teams and have one exhibition game remaining on their schedule - at Williams College in Williamsport, Mass., on Sept. 5 - before beginning regular-season play against the heavily-favoured Montreal Carabins on Sept. 10 at Molson Stadium.