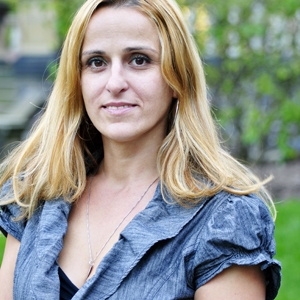 DCL candidate Claris Harbon, is among the 14 Canadian and foreign Ph.D. students will each receive a prestigious Trudeau Scholarship this year. Harbon, whose research examines how civil disobedience initiated by women can affect legislation and redress injustices, will be joining a community of creative, accomplished thinkers and doers tacking issues of fundamental importance to Canadians.

"We are thrilled that Claris Harbon, an O'Brien Doctoral Fellow at our Centre, has been nominated as a Trudeau Scholar," said Professor Colleen Sheppard, director of the Centre for Human Rights and Legal Pluralism. "Her work on women's rights is innovative and deeply important in its exploration of civil disobedience and resistance to oppression in the everyday lives of women."

Strongly committed to social change, Claris Harbon is deeply involved in questions of politics and social justice, notably for underprivileged minorities such Palestinian, Mizrahi or Ethiopian women. Among her many accomplishments, she has founded Tmura, the Israeli Legal Center against Discrimination, and she is active in many social justice organizations.

"Becoming a Trudeau Scholar is important for me. I am in the process of forming a voice within academia, and becoming a scholar in such an embracing and encouraging Foundation is exciting," confides Harbon.

"With its emphasis on the themes of human dignity and responsible citizenship, the Trudeau Foundation will enable me to pursue an interdisciplinary and dialogic research project that is located at the intersection of several disciplines including law, sociology, gender and culture, and which seeks to throw bridges between different discriminated communities," she added.

The prestigious Trudeau Scholarships are granted to social sciences and humanities students who are examining matters of present-day concern to Canadians in key areas such as the environment, international affairs, responsible citizenship, and human rights and dignity. Many Trudeau Scholars go on to become leading national and international figures.