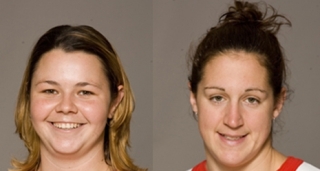 HARBIN, China (CIS) – McGill's Vanessa Davidson of Kirkland, Que., and Cathy Chartrand of Lac Nominingue, Que., each scored first-period goals as the Canadian women’s hockey team opened the competition at the 24th Winter Universiade in grand style, posting a convincing 11-0 win over Great Britain Wednesday in its first game of the round-robin tournament.

The sport of women’s hockey is making its world university games debut in China, with Canada competing against Great Britain, Finland, Japan, Slovakia and the host Chinese in the inaugural tourney.

University of Alberta forward Leah Copeland of Fort McMurray, Alta., paced the Canadian offence in the Universiade opener with three goals and an assist, while Alberta teammate Jennifer Newton of Norglenwold, Alta., Ottawa’s Kayla Hottot of Sombra, Ont., St. Francis Xavier’s Brayden Ferguson of Toronto, Toronto’s Annie Del Guidice of Hamilton and Saint Mary’s Kori Cheverie of New Glasgow, N.S., all chipped in with a goal and a helper.

Wilfrid Laurier defenceman Andrea Bevan of Collingwood, Ont., had a pair of assists.

UBC goaltender Melinda Choy earned the victory. The Victoria native was virtually untested throughout the match as the Canadians outshot their opponents 62-2, holding Great Britain to one shot in the second period and another in the third.

“Those are tough games to play,” said head coach Dan Church. “It’s easy to start making soft passes and positional mistakes against a team that’s not going to try and come out of their defensive system. It was a good way to start the tournament as we continue to adjust to the environment. I was happy with the effort, and the pace we carried throughout the game.”

The Canadians came out strong in the game’s opening minutes, and only the goaltending effort of Great Britain’s Laura Saunders prevented the first goal from coming sooner that it did. It took nearly half a period for the Canadians to find the back of the net, with Ferguson, the CIS player of the year in 2007-08, scoring after nine minutes and 46 seconds of play.

Davidson and Chartrand added first-period goals to make it 3-0 after 20 minutes.

The second frame yielded five more Canadian goals – four of which came off the sticks of Alberta Pandas. Copeland notched the first two-thirds of her hat-trick performance with Panda teammates Boras and Newton adding singles. Late in the middle period, Del Guidice made it 8-0.

Any notion of Great Britain staging the greatest upset-comeback in the history of women’s international hockey was snuffed out midway through the third stanza when Canada scored three times in a span of 2:20.

Cheverie made it 9-0, ending the night of Saunders in the process. Copeland completed her three-goal effort by scoring on relief netminder Michaela Walker with Hottot rounding out the scoring 52 seconds later.

“I thought we did a good job staying true to our game and working on the habits,” said Davidson. “We’re going to be facing Finland tomorrow and we knew that if we got away from the habits, it could be the kind of thing that costs us later in the tournament. We broke the periods down into five-minute blocks, and just tried to do our best to stay within the system that we play.”

Despite the final score, the team from Great Britain was pleased – not only with the quality of their own play, but for the opportunity to make British hockey history in the process.

“Great Britain has never faced Canada at any level of play in the women’s game,” said head coach Simon Manning. “It’s actually the first competitive game this particular team has ever played and it happens to be against what we believe to be the best team in the world. We had absolutely no doubt about the final outcome of the game and to be honest, I couldn’t have asked for things to have gone any better.”

Team Canada’s next game is scheduled for Thursday, February 19 against Finland. The Finns opened the round-robin portion of the Universiade competition with a 4-0 shutout of Japan.

Canada’s full sporting delegation enjoys a much busier day on Day 2 of the Games, with all but the biathlon team involved in competition.

SHOTS ON GOAL (by period)

PLAYERS OF THE GAME: