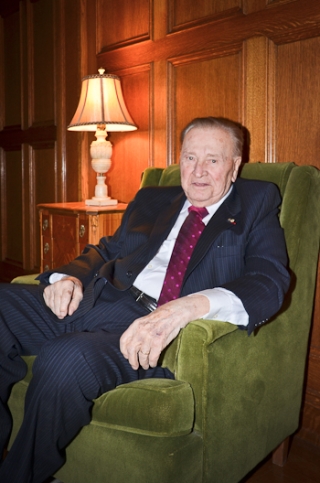 Professor Paul Dempsey and Dean Daniel Jutras are delighted to announce that a new Graduate Fellowship Fund has been created at the Faculty of Law of McGill University to celebrate Professor Nicolas Mateesco Matte, OC, OQ, QC, who directed McGill’s Institute of Air and Space Law (IASL) from 1975 to 1989.

A visiting professor at the IASL from 1961 to 1974, Professor Nicolas Mateesco Matte assumed the directorship of the Institute in the mid 70’s and breathed new life into it. At the time, Professor Matte was successful in securing funding from governmental institutions to support the Institute’s growth, and gave its research an interdisciplinary focus. In 1976, he founded the Annals of Air and Space Law and created the Center for Research in Air and Space Law, which he directed until 1993. He was named lifetime Honourary President of the Institute of Air and Space Law Association of McGill University in 1989.

“Professor Matte is turning a young 100 this year,” said current IASL director, Professor Dempsey, “and this endowment is a truly enduring way to honour a man whose impact on our Institute is unparalleled.”

Dean Daniel Jutras also noted that this new fellowship, which will be awarded to deserving graduate students coming to the Faculty of  Law to study air and space law, “was established through the generosity and solidarity of IASL graduates and friends, who recognize how much Professor Matte has contributed to the success of the Institute and to McGill’s reputation in air and space law here and abroad.”