Bielby walks away from swim awards gala with three trophies 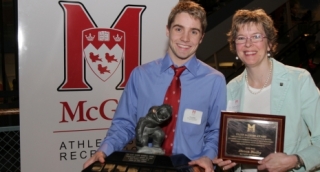 The 20-year-old electrical engineering honours student was named team MVP in addition to receiving the Redmen performance-of-the-year award for his record-breaking, gold-medal swim in the 400 individual medley at the CIS championship meet. He also received the Marie-Claude Saumure Memorial trophy, which is awarded to the swimmer who best combines academics and athletics.

On the women's side, Kristyna Cleminson of Belleville, Ont., was voted team MVP, while Valerie Grand'Maison, a freshman from Town of Mt. Royal, Que., took home the performance-of-the-year award for her time in the 400 freestyle (4:25.97) at the Quebec conference championship meet,

Other honours went to Elana Evans (most improved swimmer) of Calgary, Myriam Donato (rookie of the year) of Pointe Claire, Que., and Leanne Roach (leadership and team spirit) of Riverview, N.B.

Cleminson, a 5-foot-10 backstroker, posted a personal best at Nationals, where she made the consolation finals in the women's 200 breaststroke, finishing sixth with a time of 2:36.76.

Bielby, a 5-foot-7 middle distance swimmer won four medals at the CIS championship meet, including a gold medal in the 1500-metre freestyle. His performance at Nationals earned all-Canadian honours and qualified him to compete at the Mare Nostrum Series, a high-profile European tour of World Cup meets, in June. Last week, Bielby also took home the Uldis Auders memorial award, presented to the McGill sophomore who best combines academics with athletics.