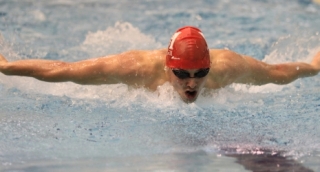 MONTREAL - McGill swimmer Steven Bielby of Pointe Claire, Que., was named male athlete of the year at the Quebec university championships over the weekend.

The 21-year-old electrical engineering junior won three gold medals and a pair of silvers to lead all McGill swimmers at the two-day meet, held at the Université de Montréal's CEPSUM pool.

McGill ended up winning five events, including two on the women's side, compared to only one race victory at the same meet a year ago.

"I am very satisfied with the overall team performance," said head coach Peter Carpenter, in his second year at the helm of McGill's swim program.  "We showed great improvement over last year, which indicates that we are on the right track.  While I would have loved to have seen a few more make it to their CIS qualifying standard, I was incredibly proud to see how our athletes continually laid it all out there, time and time again.  My swimmers showed incredible charisma and grace in their quest, and I am proud of them all."

Bielby won both the 200 and 400-metre individual medleys, posting times of 2:01.65 and 4:20.97, respectively. His time in the 200 was a Quebec championship meet record. He also swam the third leg of the winning 4x50 freestyle relay, which was clocked in a McGill record time of 1:30.33. Others on that relay were Tyler Manning-Dahan of Rosemere, Que., Joe Toops of Evanston, Illinois and Diego Pessoa of Sao Paulo, Brazil.

"While it is not surprising to see a swimmer of Bielby's ability and drive for success, having great results, his performance in the individual medley events surprised even me," said Carpenter, who previously guided the Pointe Claire swim club to seven national titles in various age categories from 2005 to 2009.

"He has always been and will always be a 'big meet swimmer'.  Despite having lost consistently to several of his main rivals during the Quebec Cup meets over the course of the season, I knew that he would be able to come in to this meet and remind them who is top dog.  He was a true superstar this weekend."

The 4x200 quartet included Sophie G. de Tonnacour of Brossard, Que., Valerie Grand'Maison of Fleurimont, Que., Joanie Stilling of Calgary and Marija Vujovic of Aurora, Ont. The 4x50 was composed of Rayven Snodgrass of Calgary and Sophie Overney-Ragan of Montreal, plus Myriam Donato and Laura Mendonca, both from Pointe Claire.

The Montreal Carabins captured the Quebec women's championship, accruing 191.4 points overall. McGill, which had finished third in the four previous Quebec Cup meets, ended up a surprising second in the final standings with 155.5 points. They edged out a stunned Laval squad by one point in the final meet, which counts for 60 per cent of the scoring. UQTR was fourth with 41.1 points, followed by Sherbrooke (6.5), UQAC (0) and UQAO (0).

Jason Boivin, a civil engineering junior from Pointe Claire, became the 22nd McGill swimmer this season to make the qualifying standard for Nationals in the 50m backstroke, with his time of 26.87.

McGill will be sending only 19 of the qualifiers, including 10 women, to the CIS championship meet at the University of Calgary, Feb. 24-26. Last year, McGill qualified a dozen, which was five more than the previous year.

Joining Boivin on the list of men's qualifiers for Calgary is Bielby, Toops and Pessoa, in addition to Matthew Khatchadourian of Beaconsfield, Que., Philippe Morin of Longueuil, Que., Derek Engel of Dollard des Ormeaux, Que., Arthur Baux of Paris, France and Pierre-Alexandre Renaud of Laval, Que. Two others qualifiers who will be unable to make the trip out west are Vincent Roy of St. Hubert, Que., and Hector Hernandez of West Bloomfiield, Mich.

Among the women heading to compete in Calgary is Stilling, Grand'Maison, Donato, Snodgrass, Mendonca and Overney-Ragan, plus Jennifer Darling of Vancouver, B.C., Elana Evans of Calgary, Leanne Roach of Riverview, N.B., and Maxime Charron of St. Lambert, Que. Sophie G de Tonnancour also qualified in a relay but will not be making the trip.