Bielby and Hill named McGill athletes of the week 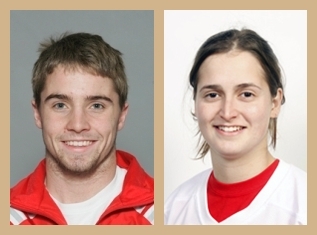 MONTREAL - Steven Bielby of Pointe Claire, Que., and Caroline Hill of Dorval Que., are the McGill University athletes of the week for the period ending Feb. 21, 2010.

Bielby, a 20-year-old electrical engineering sophomore, won one gold, a silver and a pair of bronze medals at the CIS swim championships in Toronto last weekend. He earned all-Canadian honours for the second straight year and qualified for an eight-man squad of CIS swimmers that will be going to the Mare Nostrum Series, a high-profile European tour of World Cup meets, in June. Bielby, a 5-foot-10, 150-pound distance specialist, finished atop the podium in the 1500-metre freestyle (15:18.09), destroying his own school record set last year (15:22.71). He was second in the 400 individual medley (4:14.72) and scored third-place finishes in both the 200 IM (2:01.11) and 400-freestyle (3:51:00). Bielby attended John Abbott College before his admission to McGill in 2008.

Hill, a 5-foot-5 defenceman with the undefeated women's hockey team, registered four assists on McGill's seven goals scored over two weekend victories. The 23-year-old physical & health education senior set up two goals, including the game-winner in a 4-1 road victory over the No-10 ranked Montreal Carabins last Friday. She then picked up helpers on each of McGill's first two goals in a 3-2 home-ice conquest over Concordia on Sunday. She posted a career-best 3-18-21 record in 20 games, finishing second among all Quebec conference blueliners in points and tying for the CIS assist-lead among rearguards. Hill enrolled at McGill in 2006 after graduating from The Loomis Chaffee School in Windsor, Conn.