Bibeau and Him-Lazarenko named McGill athletes of the week 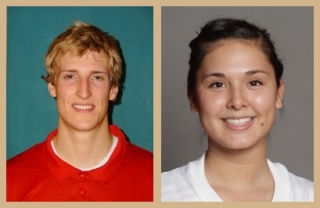 MONTREAL - Basketball players Simon Bibeau of St. Bruno, Que., and Anneth Him-Lazarenko of Laval, Que., are the McGill University athletes of the week for the period ending Nov. 28, 2010.

Bibeau, a six-foot-two, 175-pound guard, scored 40 points and was credited with six rebounds, four assists and three steals as the Redmen split their two games last weekend. The 19-year-old economics and finance freshman shot an impressive 56.5 per cent from the field (13/23), sank 5-of-10 shots from three-point range and made nine of 10 shots from the foul-line. Bibeau scored 24 points in a 72-68 loss to No.6-ranked Concordia on Friday and added 16 more in a 78-67 victory over UQAM on Saturday. He is a product of Champlain College in St. Lambert, Que.

Him-Lazarenko, a 5-foot-10 forward, tallied 37 points and grabbed 15 rebounds in a pair of weekend victories for the undefeated Martlets, who are 4-0 and off to their best start in 14 years. The 23-year-old social science junior shot 59.3 per cent from the floor (16/27), was good on her only three-point attempt and went 4-for-5 from the foul-line. Him-Lazarenko registered a "double-double" in a 61-57 road victory at Concordia last Friday with 27 points and 11 rebounds. She joined the Martlets in 2008 out of Vanier College.