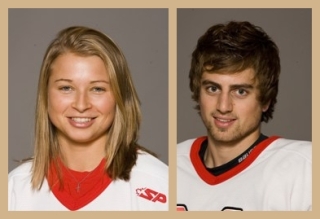 MONTREAL - Ann-Sophie Bettez of Sept-Iles, Que., and Guillaume Doucet of Anjou, Que., are the McGill University athletes of the week for the period ending Jan. 3, 2010.

Bettez, a two-time all-Canadian forward with the women's hockey Martlets, scored nine points, including a tournament-leading six goals during a three-game sweep at the Theresa Humes tourney, Dec. 28-30. Her efforts enabled McGill to extend their CIS record win streak to 70 consecutive games.  The 22-year-old management junior had one goal and two assists in a 4-1 win over Toronto, added a hat-trick and one assist in an 8-1 victory over Guelph and then tallied twice in a 4-2 decision over Manitoba. Bettez, who previously played for Dawson College before joining the Martlets in 2007, is headed overseas this week to play for Canada at the MLP Cup, an international under-22 tourney in Ravensburg, Germany, Jan. 5-9.

Doucet, a 5-foot-9, 180-pound centre on the hockey Redmen, netted five goals and added one assist during a four-game tour of Western Canada. The 23-year-old physical education junior struck twice and added a helper in a 5-4 loss to No.2-ranked Alberta on Dec.28. He then tallied a hat-trick in a 6-4 victory at UBC on Jan. 2. Doucet, who leads the Redmen in scoring with a 24-19-43 record in 25 contests overall, joined the Redmen in 2007 from the Quebec Major Junior Hockey League, where he skated for PEI and Rouyn-Noranda.