Bettez and Bouchard named McGill athletes of the week 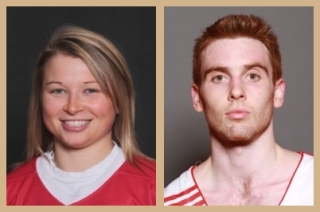 MONTREAL - Ann-Sophie Bettez of Sept-Îles, Que., and Olivier Bouchard of Montreal are the McGill University athletes of the week for the period ending Feb.6, 2011.

Bettez, a 5-foot-4 forward with women's hockey team, helped Canada win gold at the FISU Winter Games in Erzurum, Turkey. The 23-year-old management senior scored the insurance goal in the gold medal final, a 4-1 victory over Finland on Saturday. During the tournament, she tallied five goals and added four assists to go along with a plus-13 rating in seven games overall. Bettez, who joined the Martlets in 2007, is a product of the Dawson College hockey program.

Bouchard, a 5-foot-10, 160-pound point-guard with the men's basketball team, scored 21 points as McGill rallied from an early nine-point deficit to defeat No.8-ranked Laval 85-83 before a capacity crowd at Love Competition Hall last Friday. The 20-year-old management sophomore made seven of 16 attempts from the field, including a 5-for-9 effort from three-point range. He went 2-for-4 from the foul-line and was credited with six assists, four rebounds and three steals. Bouchard joined the Redmen last year after graduating from College Montmorency.