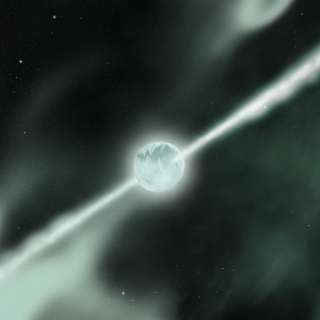 McGill University researchers have participated in the discovery of the most distant stellar object ever found - "a beacon from the cosmic dark ages" - Gamma-ray Burst 090423. The burst, emitted by a massive star exploding into a supernova, was detected on April 23 by an international consortium of institutions including NASA, using telescopes positioned in the northern and southern hemispheres. The burst sheds light on the very origins of the universe, researchers said. Their results are published the journal Nature.

McGill physics professor Robert Rutledge, a collaborator in the project, used the Gemini-North telescope - one of twin eight meter optical/infrared telescopes located in Hawaii and Chile -- to observe the ancient burst. The detection of a gamma-ray burst in two wavelengths at the red end of the spectrum, combined with absorption at the blue end, created a flurry of activity at other telescopes around the world.

Because light travels at a constant 300,000 kilometers per second, observing distant stellar objects inevitably means that astrophysicists are also looking backwards in time. The further away the object is, the older the picture we are seeing.   The first very distant objects detected were quasars -- black holes a million to a billion times the mass of our sun, and the brightest steady sources known. Over the past decade, astronomers have searched for an even brighter type of object: supernovas, or the death-throes of supermassive stars that emit gamma-ray bursts.  Though more difficult to observe, because gamma-ray bursts are only bright for a very short period of time -- a few hours, maybe a day or two -- their higher brightness permits researchers to confirm the distance of this gamma ray burst to be greater than any other object yet observed, setting a new distance record, to a time when the universe was only 625 million years old. The universe's age has been measured, fairly accurately, at approximately 13.7 Billion Years.