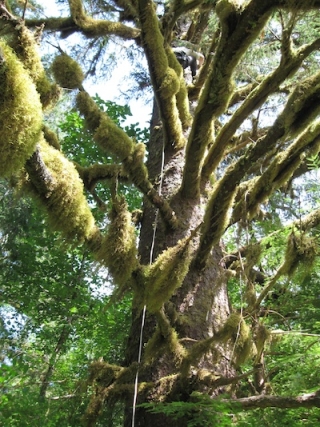 A new study by Dr. Zoë Lindo, a post-doctoral fellow in the Department of Biology at McGill University, and Jonathan Whiteley, a doctoral student in the same department, shows that large, ancient trees may be very important in helping forests grow.

These findings highlight the importance of maintaining the large old-growth trees in the coastal temperate rainforests that stretch from Southern Alaska to Northern California. Lindo’s findings suggest that it is the interactions between old trees, mosses and cyanobacteria, which contribute to nutrient dynamics in a way that may actually sustain the long-term productivity of these forests.

“What we’re doing is putting large old trees into a context where they’re an integral part of what a forest is,” says Dr. Lindo. “These large old trees are doing something:  they’re providing habitat for something that provides habitat for something else that’s fertilizing the forest.  It’s like a domino effect; it’s indirect but without the first step, without the trees, none of it could happen.”

There are three players in this story: 1) large, old trees; 2) mosses that grow along their branches; and 3) a group of bacteria called cyanobacteria associated with the mosses. The cyanobacteria take nitrogen from the atmosphere and make it available to plants–a process called “nitrogen fixation” that very few organisms can do.

Moss is the crucial element. The amount of nitrogen coming from the canopy depends on trees having mosses.

“You need trees that are large enough and old enough to start accumulating mosses before you can have the cyanobacteria that are associated with the mosses,” Lindo said. “Many trees don’t start to accumulate mosses until they’re more than 100 years old. So it’s really the density of very large old trees that are draped in moss that is important at a forest stand level. We surveyed trees that are estimated as being between 500 and 800 years old.”