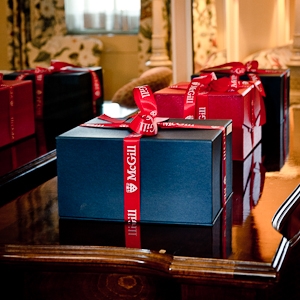 On 18 June 2012 at Montreal's University Club, it was with great pride that the Faculty of Law presented two James A. Robb Awards to Me. Tina Hobday and Me. Marc Barbeau, who have both distinguished themselves at the Faculty and within the broader university community by their outstanding volunteer work.

Partner at Langlois Kronström Desjardins, Tina Hobday, BCL'93, LLB'93, has been actively involved at McGill University for over  12 years. Me. Hobday is currently president of the McGill Alumni Association, having previously served as executive committee member and treasurer of the Association. She is also a founding member of the Young Advisory Board at the Faculty of Law.

Marc Barbeau, BCL'84, LLB'85, is a partner and board member of Stikeman Elliott, where he practices in the areas of mergers and acquisitions, reorganizations and complex corporate governance. Me. Barbeau is one of the most dedicated volunteers at McGill Law: he is a member of the Faculty's Advisory Board and has been lecturing at the Faculty since 1996 in the area of corporate finance, and financial and corporate legal history. Me. Barbeau also established the Ilana Lederer Legal Education Fund, which aims to develop mentoring between students of the Faculty and graduates.

The James A. Robb Award

The James A. Robb Award celebrates those who nobly give of their time and efforts to support the Faculty of Law in the pursuit of its academic endeavours. It was created in honour of James A. Robb, BCL'54, who, as a former McGill Governor and former president of the Alumni Association, is one of McGill's most well-known volunteers.