Alan Evans inducted into the Royal Society of Canada 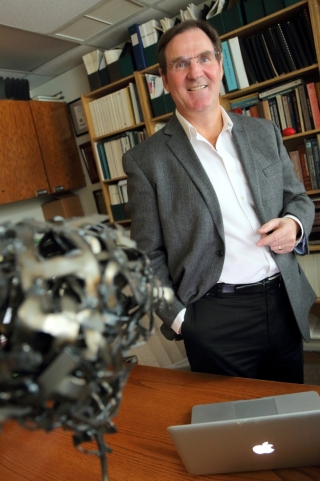 Dr. Alan Evans, James McGill Professor of Neurology and Neurosurgery, Psychiatry and Biomedical Engineering at the Montreal Neurological Institute, McGill University has been named a Fellow of the Royal Society of Canada (RSC). He is one fourteen new RSC Fellows from McGill University, including McGill Principal Suzanne Fortier. The induction ceremony will take place on Friday, November 27 in Victoria, B.C.

Dr. Evans is a pioneering scientist who has helped map the human brain. He has redefined the role of neuroimaging by developing techniques and analytic tools that are now universally used. One of his signature achievements was creating the Montreal Neurological Institute-reference brain, the most frequently used spatial reference system for cataloguing structural and functional data for both normal and diseased brains. More recently, he co-led the “Big Brain Atlas,” in which scientists finely sliced a human brain into 7,400 wafer-thin sheets which they digitally reconstructed. The resolution of the images approaches the cellular level, allowing for a deeper understanding of the brain’s anatomy and pathophysiology.
His contributions have led to a standardization of neuroimaging techniques and tools, enabling reliable measures of brain function across various populations and thus making neuroimaging a much more clinically relevant research tool. He also has combined epidemiological and genetic data to develop biomarkers for early diagnosis of neurological and psychiatric diseases. His work has drawn more attention to the importance of brain science, and changed the way in which medical schools and graduate schools teach neuroanatomy.

Established in 1882, the RSC is the senior national body of distinguished Canadian scholars, artists and scientists. The RSC consists of nearly 2,000 Fellows selected by their peers for outstanding contributions to the natural and social sciences, arts and humanities. As Canada’s national academy, the RSC not only recognizes academic excellence, but it also advises governments and organizations, and promotes Canadian culture.