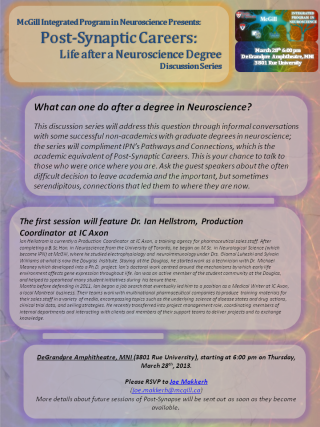 What can one do after a degree in Neuroscience?

This discussion series will address this question through informal conversations with some successful non-academics with graduate degrees in neuroscience; the series will compliment IPN’s Pathways and Connections, which is the academic equivalent of Post-Synaptic Careers. This is your chance to talk to those who were once where you are. Ask the guest speakers about the often difficult decision to leave academia and the important, but sometimes serendipitous, connections that led them to where they are now.

Ian Hellstrom is currently a Production Coordinator at IC Axon, a training agency for pharmaceutical sales staff. After completing a B.Sc.Hon. in Neuroscience from the University of Toronto, he began an M.Sc. in Neurological Science (which became IPN) at McGill, where he studied electrophysiology and neuroimmunology under Drs. Giamal Luheshi and Sylvain Williams at what is now the Douglas Institute. Staying at the Douglas, he started work as a technician with Dr. Michael Meaney which developed into a Ph.D. project. Ian’s doctoral work centred around the mechanisms by which early life environment affects gene expression throughout life. Ian was an active member of the student community at the Douglas, and helped to spearhead many student initiatives during his tenure there.
Months before defending in 2011, Ian began a job search that eventually led him to a position as a Medical Writer at IC Axon, a local Montreal business. Their teams work with multinational pharmaceutical companies to produce training materials for their sales staff in a variety of media, encompassing topics such as the underlying science of disease states and drug actions, clinical trial data, and selling strategies. He recently transferred into project management role, coordinating members of internal departments and interacting with clients and members of their support teams to deliver projects and to exchange knowledge.

Send any questions to joe.makkerh [at] mcgill.ca