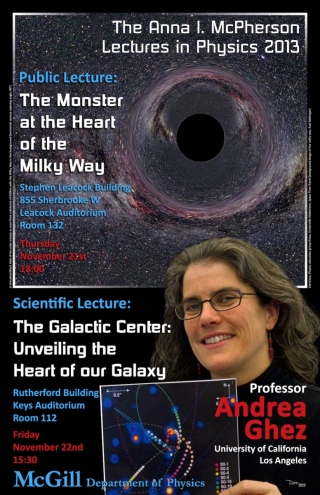 The McGill Department of Physics presents the 2013/2014 Anna I. McPherson Public Lecture.  This year, the lecture will be given by Prof. Andrea Ghez, from the University of California, Los Angeles.  The lecture is entitled "The Monster at the Heart of the Milky Way" (summary here). The lecture will be followed by night sky observations (weather permitting) organized by AstroMcGill. The lecture is intended for a general audience, and it is free of charge. No reservation is necessary. The event will be held in the Leacock Auditorium (room 132) in the Stephen Leacock Building at 6pm.

Andrea M. Ghez, a professor of Physics & Astronomy who holds the Lauren B. Leichtman & Arthur E. Levine chair in Astrophysics, is one of the world's leading experts in observational astrophysics and heads UCLA's Galactic Center Group. She earned her B.S in Physics from MIT in 1987, and her PhD from Caltech in 1992 and has been on the faculty at UCLA since 1994. Best known for her ground-breaking work on the center of our Galaxy, which has led to the best evidence to date for the existence of supermassive black holes, she has received numerous honors and awards including the Crafoord Prize in Astronomy (she is the first woman to receive a Crafoord prize in any field), a MacArthur Fellowship, election to the National Academy of Sciences, the American Academy of Arts & Sciences, and the American Philosophical Society. Her work can be found in many public outlets including TED, NOVA's Monster of the Milky Way, Discovery's Swallowed by a Black Hole, and Griffith Observatory. For more information see http://www.astro.ucla.edu/~ghezgroup/gc/ and http://www.astro.ucla.edu/~ghez/.