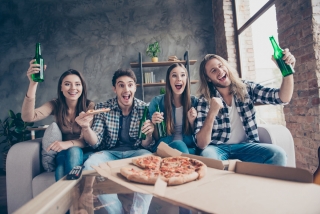 What makes people take risks? Not stunt women or formula 1 drivers. Just ordinary people like you and me. Research published this week in PLOS ONE suggests that unexpected improvements in everyday life (sunshine after many days of rain or a win by a local sports team) are correlated with a change in a city’s mood and an increased likelihood that it’s citizens will do risky things like gamble.

Cities seem to have moods that fluctuate from day to day. Now, thanks to social media, these city moods are also measurable.

The McGill-led research team used automated techniques to gauge the “sentiment” of over 5 million Twitter posts from 2012 and 2013, geotagged to six different large US cities (New York, Boston, Chicago, Dallas-Fort Worth, San Francisco Bay Area and Los Angeles). This, in turn, allowed them to deduce the mood of the city on any given day.

"We have found that Twitter users serve as the ‘canaries’ of their communities,” says Johannes Eichstaedt, a computational social scientist at the University of Pennsylvania and the co-author of the paper. “What they say on Twitter is representative of the mood shared on the streets and in the local communities. So, using artificial intelligence, we were able to extract information about the mood of the community as a whole from what those on Twitter say."

The researchers unpacked the language expressed in social media data to see how the mood of the tweets, and hence of the cities, could be understood on a day-to-day basis. They then set out to explore whether, by looking at unexpected positive outcomes (such as unexpected sports wins or a sunny day after days of rain), they could predict when a city would be in a good mood. Their next step was to look into how these positive city moods were linked to increased risk-taking.

How lucky is Chicago feeling today?

It all depends on whether the White Sox won last night or the sun is shining after days of grey skies.

Psychology experiments in the lab have already shown that people tend to feel better and take more risks when something goes better than they had expected. The researchers wanted to find out whether the same held true at a city-level. So they looked at whether increased purchases of daily lottery tickets in Chicago and New York, where there was no particular incentive to buy on one day compared with another since the odds and payoffs remained constant, was linked with a positive city-mood, as reflected on social media. And they found that this was indeed the case—though the authors note this effect is subtle—for example, a ‘good mood’ day in Chicago and New York City predicts an increase in spending on gambling of close to 2.5% per person per day in particularly reactive neighbourhoods.

Ross Otto, from McGill’s Psychology Department is the lead author on the paper: “By using social media data we were able to examine the impact of collective events upon subjective well-being at the scale of large cities.” He adds, “This information about how fleeting city moods are tied in with risk-taking behaviour could potentially help those who want to discourage others from gambling decide when their responsible gambling promotion efforts will be most needed.”