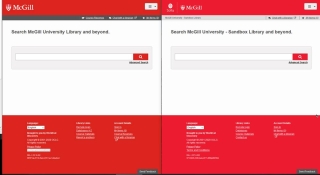 As you may know, McGill Library has partnered with the Bureau de coopération interuniversitaire (BCI) and a coalition of 17 other Quebec universities to implement a unified catalogue that rolled out on July 8, 2020. Learn more here.

Visual rebranding is the next step towards the implementation of this shared catalogue and the new look will go live on Friday, July 24, 2020. There will be no changes to functionality, only the branding will be slightly different. The image here shows the previous interface on the left and the rebranded version on the right.

The rebranding will feature the newly-designed Sofia logo, which is what the discovery tool is called. The name was chosen by BCI’s library subcommittee because it's the Greek word meaning "wise" and is a good metaphor for academic libraries, which act as a gateway to wisdom. Sofia also recalls the human dimension of libraries, and is easy to pronounce in French, English, and several other languages, reflecting the diversity of Quebec’s academic community.