Using patients’ own cells to accelerate research into neurological disease 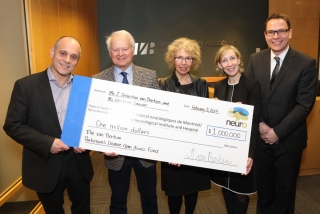 A patient’s very own skin cells may hold the key to new treatments and even cures for devastating neurological diseases. A generous $1 million donation from Mr. J. Sebastian van Berkom, and critical partnerships with Brain Canada, Laval University, Marigold Foundation and the FRQS-Réseau Parkinson Quebec are driving an innovative, iPSC (induced pluripotent stem cell) research platform that will transform research into Parkinson’s and other neurological diseases.

Millions of Canadians are affected by diseases of the brain such as ALS, Parkinson’s and brain tumours, for which there are limited treatments and no cures. By 2020, neurological conditions will become the leading cause of death and disability. “Everyone’s lives are touched in some way by neurological disease, says Mr. van Berkom, President of Van Berkom and Associates Inc." In creating The van Berkom Parkinson’s Disease Open-Access Fund, I hope to change lives and support new research that will lead to new treatments and one day cures. The iPSC platform is a new paradigm for neuroscience research and as one of the world’s great neuroscience centres, The Neuro is the place to drive it forward.”

The Quebec iPSC core facility is a provincial core headed by Drs. Fon and Puymirat. Reprogrammed cells at Laval University will be created from different sources such as skin biopsies, blood or urine. The Neuro’s component of the platform will consist of two core facilities. The iPSC neuronal differentiation core – which differentiate iPSCs into functional neurons, headed by Dr. Eric Shoubridge, and the iPSC genome-editing core providing unprecedented ability to study the influence of disease mutations, headed by Dr. Peter McPherson. Acknowledgments are extended to Dr. Salvatore Carbonetto and Huashan Peng of the Centre for Research in Neuroscience at McGill, for their expertise and training on methods to differentiate iPSCs into neurons.

The Montreal Neurological Institute and Hospital — The Neuro, is a unique academic medical centre dedicated to neuroscience. Founded in 1934 by the renowned Dr. Wilder Penfield, The Neuro is recognized internationally for integrating research, compassionate patient care and advanced training, all key to advances in science and medicine. The Neuro is a research and teaching institute of McGill University and forms the basis for the Neuroscience Mission of the McGill University Health Centre. Neuro researchers are world leaders in cellular and molecular neuroscience, brain imaging, cognitive neuroscience and the study and treatment of epilepsy, multiple sclerosis and neuromuscular disorders. For more information, visit www.theneuro.com