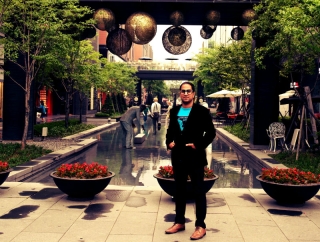 Usman W. Chohan (楚浩云) is an MBA candidate at Desautels with a Concentration in Global Strategy and Leadership. He is currently on an MBA exchange in Beijing, at a joint program between Tsinghua School of Economics and Management (SEM) and MIT. The following piece is based on his work on the “Ubiquitous  City” of Songdo, South Korea, where he was based in early May, 2014 as part of an analysis of Urbanization Trends in Asia.

“A single idea from the human mind can build cities. An idea can transform the world and rewrite all the rules.”  - Dom Cobb, Inception

The protagonist of the 2010 movie Inception delves into the deepest recesses of his mind, and therein spends what seems to him an eternity constructing a city out of his sheer imagination. There is, in fact, a city being designed today which bears a striking resemblance to the city built within the dreamscape of Inception. It is at the forefront of urban design, respecting ecological principals, technological advances, and avant-grade urban planning precepts. Known to the world as Songdo (송도), this emerging city in South Korea is a futuristic urban project on a grand scale. With a projected cost in excess of $40 billion, it is one of the most expensive development projects ever undertaken.

Songdo (Sōngdǎo in Mandarin; Matsushima in Japanese) is being built from scratch on 1,500 acres of land reclaimed from the Yellow Sea, 65km southwest of Seoul.  It is inextricably connected to the Incheon International Airport by the Incheon Bridge which spans over 12km, and it will contain a panoply of facilities in terms of schools, universities, hospitals, apartments, office buildings and cultural amenities, with replicas of landmarks such as New York City's Central Park and Venice's waterways to be incorporated as well. Songdo will also be a part of the Incheon Free Economic Zone, making it a crucial component of Seoul's economic landscape.

Songdo is a continuation of Seoul's commitment to urban innovation, and its development is part of former president Lee Myungbak's push towards adjusting the South Korean economy from an export-driven manufacture-based economy to a low-carbon, sustainable, and knowledge-driven economy. Seoul is already one of the most "intelligent" cities in the world, with factors such as the longest subway system and total Wi-Fi access across the city contributing to a high and "wired" quality of life.  However, Songdo's advancements overshadow Seoul's modernity, and Songdo is exerting significant influence on the minds of urbanists because it embodies two avant-garde concepts: (1) the Aerotropolis, and (2) the Ubiquitous City (U-City).

The first concept, an Aerotropolis, can be characterized as a city that is defined by the centrality of its airport infrastructure. Historically, airports were constructed at a considerable distance to city centres, and seen as somewhat of a nuisance, with land values declining significantly in proximity to the airport. However, the Aerotropolis model lays a new emphasis on the airport, due to its importance in the transit and transport of people between cities and the consequent connectivity of the urban entity to a broader geography. In light of the increased mobility caused by globalization, the Aerotropolis model advocates the development of a city based on the accessibility of its residents to effective connections. The applicability of the Aerotropolis model to Songdo is immense due to the geographical dividend of its location: one-third of the world's population is within a three-and-a-half-hour flight from Songdo. Therefore, Songdo can leverage the Aerotropolis model to enhance its connectivity and economic importance manifold as a "hub" in its truest sense. Songdo can help to connect the numerous population megacenters in the region, such as Beijing, Tokyo, Shanghai, and Hong Kong in a highly effective way.

The second concept, The Ubiquitous City (U-City), can be defined as a city that applies a substructure of "ubiquitous computing" to the functionality of its urban systems, and can be contextualized as the integration of information systems with social systems: every device, component, and service within the city is linked to an information network, largely through wireless networking channels. This coordination between the various components allows for greater efficiencies and synchronization to be realized. The term "Ubiquitous City" is broadly recognized as a distinctly Korean concept, and Songdo is to be most emblematic of this phenomenon. Songdo’s urban model bears several distinct features: its ubiquitous computing allows it to micro-manage numerous aspects of the city such as energy consumption and traffic; and the city can "interact" with citizens at the individual level. An example of new technologies being implemented in the city is its waste disposal system, which will not rely on garbage trucks but rather on a network if tubes that will suck in the garbage and transport it efficiently to treatment facilities. Another example is that the water pipes are able to distinguish between potable and non-potable  water, thereby preventing potable water to be squandered in devices such as showers and toilets. Furthermore, as an example of its sustainable mandate, 40% of its area is dedicated to outdoor spaces. Songdo has qualified for Leadership in Energy and Environmental Design (LEED), meaning that it adheres to the highest environmental standards for energy consumption and waste; and it is the only Non-US city to do so.

The quintessential challenge, however, that new cities face is to attract citizens to come and live there (for an example of difficulties in urbanization in the Far East, please see my article on Erdos City, China Here). Many new conurbations across Asia have not been able to invite sufficient residents to achieve the projected critical mass of citizens to maintain a high-level of social services. However, Songdo is meeting this challenge by attracting a particular type of resident using a basic social service as its premise: high quality education, particularly university-level education. By the end of 2014, four American universities will have built their foreign campus within Songdo, therein offering its residents a top-level North American education whilst residing in South Korea. This education-based initiative bolsters government efforts to forge a knowledge-based economy.

In sum, Songdo is a futuristic city in South Korea that portends the promise of sustainable urban development by fusing technological advances with urban precepts for efficient and ecologically-conscious city life. Its novelty as an Aerotropolis and Ubiquitous City are delivering inspiration to the minds of many urbanists, with its avant-garde connectivity and synchronization of social services setting a new standard for future urban developments. It has been said that “a single idea from the human mind can build cities”, and it is the idea of sustainable technology that has propelled Songdo forward as an Ubiquitous City, and it in turn may inspire other cities of the future, in years to come.