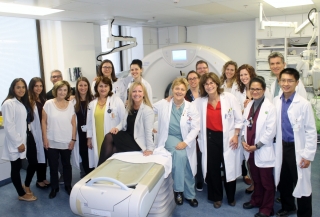 Stroke is the third-leading cause of death in Canada. Each year, some 14,000 Canadians die as a result of a stroke.

June is Stroke Awareness Month, a time to spread awareness of the causes and effects of stroke as well as its treatment.

“People who are aware of the causes can take steps to reduce the risk of having a stroke,” says Rosa Sourial, clinical nurse specialist at The Neuro’s award-winning neurovascular unit, one of Montreal’s two tertiary stroke centres. “Furthermore, a patient who receives the right treatment as soon as possible after a stroke will improve the chance of a better outcome.”

If you believe you or someone around you is having a stroke, it is important to call 911 immediately. The Heart and Stroke Foundation of Canada provides information on how to tell if someone is having a stroke.

This year, the 20-bed unit will add 10 new beds, and they are constantly looking for ways to improve its services.

“Stroke patients typically have physical weakness and paraplegia, so they need more equipment and assistance. We were happy recently to receive a private donation for two ceiling lifts, which are hoists that make it easier for patients to get out of bed and move about each day, which is part of their rehabilitation,” says Christine Bouchard, unit nurse manager. “Another recent donation was for a Geri chair, a recliner that gives patients the proper torso support so that they can be moved out of the room.”

The Neuro’s stellar performance in treating stroke was recognized recently by the Quebec medical group, Profession Santé, which awarded its 2017 Interprofessional Team Prize to the Neuro’s neurovascular unit.

“The secret of its success is devotion, enthusiasm, respect and professionalism,” cited the award announcement. “Communication among professionals is at the heart of its winning formula.”

The award praised the neurovascular staff for sharing vital information about each patient at daily morning briefings, and for revising rehabilitation plans according to the patient’s state that day.

“Dr. Tampieri was part of the birth of our neurovascular program,” notes Dr. Teitelbaum. “Without her tireless effort that went above and beyond normal work hours, the program would not have happened. A remarkable person.”

At The Neuro, a patient’s rehabilitation following a stroke begins without delay.

“We believe the sooner we start rehabilitation, the brain can begin to rewire, so the next day after the stroke, we introduce the fun stuff,” says Rosa Sourial.

The “fun stuff” includes music and dance therapy and, new to The Neuro, pet therapy with visits by congenial dogs.

“We had a young female patient with a bad frontal hemorrhage who was totally without emotion, lying flat,” recalls Dr. Teitelbaum. “We went in with music and she started tapping on the xylophone and smiling. That experience turned her around. From that moment on, she became engaged and got better.”

Dr. Teitelbaum and her colleagues have found that music and dance therapy significantly help patients to regain their ability to move and to speak.

“Patients who couldn’t speak started to sing, and from there, started to speak again,” notes Dr. Teitelbaum.

“You should see their faces when the patients hear music that they like - there’s a big change,” says Christine Bouchard. “Even family members will start dancing.”

At present, music sessions are offered by about ten volunteer McGill students who undergo a short therapy training session.

“We’ve noticed that music and dance change patients’ morale and mood - they become more involved and engaged,” says Rosa Sourial. “It makes everyone happy and there are no side effects. After the music sessions, many patients will say, ‘I’m going to get better.’”

Dr. Teitelbaum says that the ideal would be to employ a full-time recreational therapist.

In May, the first pet therapy program in The Neuro’s 84-year history began when two different dogs visited the neurovascular unit’s patients. The unit hopes to have weekly visits.

“I asked one young patient whether she would like to see a dog and her eyes opened huge,” recalls Bouchard.

One area of scientific research that the neurovascular unit is collaborating in involves new drugs for use in a thrombectomy, a surgical procedure in which a drug is given to dissolve a blood clot in the brain.

“In the past few years, many studies have shown that pulling out the clot is a good thing if it’s performed without delay,” says Dr. Teitelbaum. “In these cases, as soon as you give the drug to dissolve the clot, there are remarkable benefits. Some patients can walk out after two days.”

A standard clot-dissolving drug used for thrombectomies, heart attacks and other clotting conditions is Alteplase. In the case of a stroke, Alteplase is effective within four-and-a-half hours after occurrence.

“The Neuro is part of a study of a new drug called Tenecteplase,” says Dr. Teitelbaum. “Cardiologists find that Tenecteplase works well after heart attacks. It is administered more easily than Alteplase and there is less bleeding. We’re seeing that it has good results in the case of stroke, too.”

Another study at The Neuro involving stroke patients is being conducted by Chris Pack, a principal investigator in the neural circuits research unit who studies visual deficiencies. He has created tests to assess where a patient may have lost part of their vision due to stroke.

A stroke can occur when natural blood flow to the brain is disrupted for some reason. The most common such event is an ischemic stroke, in which blood flow is briefly interrupted. In a hemorrhagic stroke, which is far more serious, a blood vessel in the brain ruptures.

Brief, tiny strokes are Transient Ischemic Attacks (TIA). Although its effects are negligible, a TIA should be considered as a warning because a person is five times more likely to have a stroke within two years.

Damage in the brain as a result of a stroke depends on two factors: the region that was affected and the length of time during which the event first occurred and continued. Medical treatment should be applied as quickly as possible to contain the damage. A victim who receives proper drug treatment within three or four hours of a stroke can significantly reduce the extent of potential brain damage.

After a minor stroke, a victim can expect to recover fully. Major strokes can cause serious effects: victims might be unable to speak, read, write, recall events, or to move normally.

The main warning signs of stroke are weakness, speech or vision problems, severe headaches, dizziness leading to disequilibrium. If you experience these symptoms, consider seeing a doctor.