“Stressed out” corals thriving thanks to mangroves 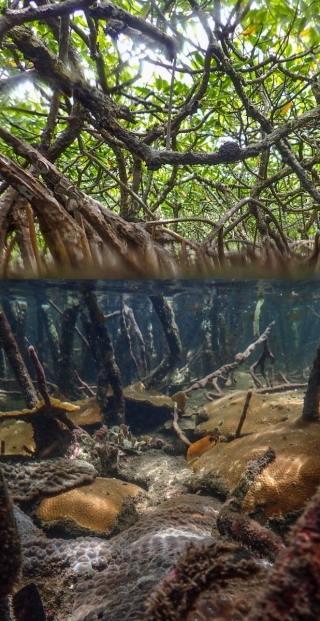 Tropical coral reefs are the most biodiverse underwater ecosystem, providing a home to more than a quarter of all marine species. No strangers to environmental stressors and the on-going impacts of climate change, the survival of corals has increasingly been under threat in recent years. A collective of researchers, including from McGill University, have analyzed how environmental factors influence the growth and health of corals and found that more species of corals are living in the mangrove forests than in nearby shallow reefs. This is a testament to coral adaptability, and the importance of ecological partnerships such as between corals and mangroves, for the resilience of these ecosystems in the wake of human-made environmental turmoil.

In a recent article published in Ecosphere, the team examined corals living under the canopies of mangroves and among their roots and hypothesized that mangroves may serve as a refuge from environmental stressors such as high solar intensity and warmer temperatures, both of which are present on adjacent shallow reefs.

On a snorkeling excursion in Bocas del Toro, Panama, Heather Stewart, a McGill PhD student in the Department of Biology and the lead author of this study, noticed an unusual number of coral species living in the shade of a mangrove forest in less than a meter of water.

“While studying the plants and animals living underwater on the roots of mangrove islands in Panama, I found these gardens composed of coral colonies from multiple species growing in the shade of the mangrove forest canopy. This seemed unusual so I investigated further. The corals in the mangrove showed no signs of bleaching or disease, and the size of the coral colonies indicated that they had been there for a while. This observation led me to investigate the relationship between the mangroves and corals,” explains Stewart.

“When you swim into the mangrove forest, it is like a light switch is flipped off and suddenly you are surrounded by darkness. Once your eyes adjust, you realize how enchanting and vibrant the root community is. I wanted to tease out whether the differences in coral species, health, and survival between the mangrove and shallow reef habitats were because of light and temperature. That is why I designed this experiment to manipulate light both on the reef and in the forest canopy,” adds Heather, whose work is co-supervised by Lauren Chapman in McGill’s Department of Biology and Andrew Altieri of the University of Florida who are co-authors on this recent publication.

The researchers conducted an experiment in which they pulled back the canopy in mangroves and allowed in light as on the reef, and added shades to the reef to mimic the mangrove canopy, and found that light intensity was a key environmental parameter mediating coral bleaching, a sign of stress, and survival. Their results revealed that mangrove habitats provided a refuge from the light stress present on nearby shallow reefs. Moreover, they discovered that corals from the reef bleached less than those originating from the mangrove corals following transplantation into the others’ habitat, suggesting that those corals that persist on reefs have had to develop increased tolerances to their more stressful setting.

If mangroves can be protected from human destruction, they may serve as refugia for corals under climate change and offer a strategy for coral reef persistence.

An incentive for better marine conservation

Based on their findings, the researchers hope to highlight key interactions between mangroves and corals, and thereby contribute to their conservation. “When I began my PhD studying this mangrove-coral system, there was extremely limited information about the relationship between these coexisting mangroves and corals. These results are important because they suggest another mechanism by which we may be able to help prevent some corals from going extinct,” concludes Heather.

Next steps should include scientists working with local communities and government as Marine Protected Areas are expanded to meet the International Union for Conservation of Nature goal of protecting 30% of the world’s oceans by 2030.