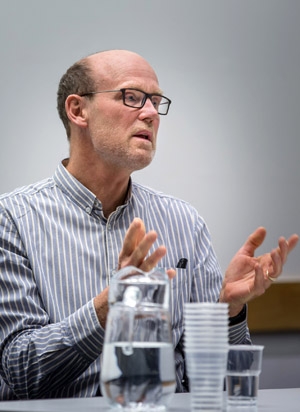 The Faculty of Law proudly congratulates Professor Stephen Smith, who recently returned from a five-week stay in New Zealand as the NZ Law Foundation Distinguished Fellow of 2017. This prestigious fellowship is granted to one eminent international legal scholar each year. Past fellows include the Chief Justice of Canada the Right Hon. Beverley McLachlin, and this year’s Distinguished Tomlinson Visiting Professor John Borrows, from the University of Victoria.

Professor Smith spent approximately one week at each of New Zealand’s six law schools, where he contributed to faculty seminars, spoke in classes, and met with professors and graduate students. He also gave a series of public lectures, and met with practitioners and members of the judiciary, including Supreme Court judges. During the tour, Professor Smith mainly discussed materials from his upcoming book on remedies, which he is currently finalizing.

“Steve Smith is one of the common law world’s most distinguished and cutting-edge thinkers about the theoretical and doctrinal dimensions of private law. His present ground-breaking project designed to further our understanding of how private law remedies work meant that he was an obvious candidate to take up one of New Zealand’s most prestigious visiting appointments,” said Charles Rickett, Dean of the Auckland University of Technology School of Law, who presented Professor Smith’s nomination.

“I am delighted to see this recognition of our colleague, Stephen Smith, who has long been internationally recognized as a superb legal scholar and theorist,” said Dean Robert Leckey. “He does us proud.”

In 1998, the Foundation endowed a fellowship so that New Zealand’s six law schools could have the opportunity to host a distinguished international scholar for up to two months each year. This award enables the sharing of legal knowledge for the benefit of both the legal profession and law students in New Zealand. The selection, by invitation only, is carried out by the Deans of New Zealand’s law schools in conjunction with the New Zealand Law Foundation.