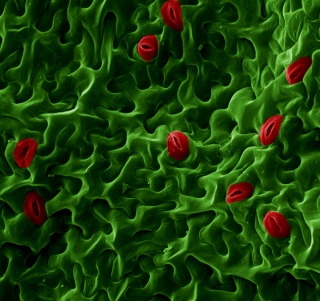 The discovery of the mechanics and molecular mechanism that dictate cell shape formation in plants by a team of McGill researchers offers new clues about the fundamental processes governing tissue formation in multicellular organisms.

Plants are made of cells that come in a wide array of shapes and sizes, each of which is closely related and essential to the function of a specific tissue.

“The photosynthetic tissue on the inside of a leaf has a sponge-like architecture formed from star-shaped cells that promotes the passage of oxygen and carbon dioxide. The leaf’s ‘skin’ tissue, the epidermis, on the other hand, is a flat layer of tightly connected, flat cells that doesn’t let anything pass through except at designated openings. But we really didn’t know how these strikingly different cell shapes come to be,” said Anja Geitmann, professor and dean of McGill’s Faculty of Agricultural and Environmental Sciences.

Working from the premise that biological organisms must abide by physical laws, Geitmann and her colleagues used engineering principles to run computer simulations of the pressures and forces required to give a plant cell a given shape.

“The typical pressure in a plant cell is higher than that in a car tire,” Geitmann explained. “A growing plant cell can, therefore, be compared with a rubber balloon being inflated. If pressure drives plant cell growth, we wondered how it could be possible to generate a balloon (or cell) that is not simply spherical but has a characteristic jigsaw puzzle-like shape, like that of the cells forming the leaf epidermal cells.”

The predictions obtained from their computer simulations served as the starting point to find the biological structures that determine a cell’s shape.

In studies recently published in Cell Reports and Plant Physiology, the team used cell biology and high-resolution microscopy to show that two well-known molecules – cellulose, a material with which clothing is made, and pectin, the gelatinous substance we use to make jam – play a crucial role in sculpting epidermal leaf cells.

“Our results show that the mechanics of leaf epidermal cells is similar to that of Mylar balloons,” Geitmann explained. “Rather than swelling up into a perfect sphere-like a rubber balloon, a Mylar balloon forms wrinkles at its seam and this is what we think happens in the leaf cells; these wrinkles might be the trigger that eventually gives rise to the jigsaw puzzle-like pattern of a leaf’s skin.”

Geitmann believes that the mechanics involved in giving a leaf cell its distinct shape will likely be similar to those involved in sculpting other types of plant cells.

Her team is now trying to determine the reasons why leaf “skin” has such a complex jigsaw puzzle-like pattern.

“We think plants evolved this way so that the leaves can better resist destructive mechanical stress and we are performing both modelling and experimental tests to show this. Science is slowly unraveling the puzzle of life, one piece at a time,” she said.

This project was supported by a Discovery grant from the Natural Sciences and Engineering Research Council of Canada (NSERC) and the Canada Research Chair Program.