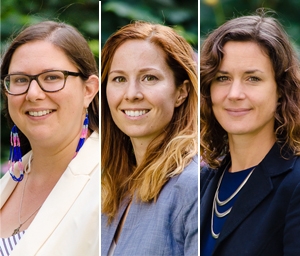 The Faculty of Law is pleased to welcome three new colleagues to its administrative team.

Charlotte Burns, BCL/LLB’12, was appointed to the newly-established position of Student Advising Administrator (Indigenous & Equity-Seeking student groups). Charlotte is urban mixed background Lenape/Anishinaabe from Munsee Delaware Nation. She arrives from Enrolment Services at McGill, where she occupied the position of records administrator and trainer. Charlotte’s main priorities will be providing academic advising and personal support for Indigenous students and students from other equity-seeking groups, such as racialized students, students with a disability, gender non-conforming and trans students.

After having worked for the Career Development Office in her student years, Sophie Roy-Lafleur, BCL/LLB’11, is returning to the Faculty take over as the CDO’s Director as of October 10. Since 2013, Sophie practiced labour law at the Montreal law firm Lapointe Rosenstein Marchand Melançon. She has also worked for Baker McKenzie, in Toronto. She is joining us with a lot of ideas on how to further enhance the services offered to the student community, and her recent practice experience will help her provide valuable advice to students on the legal job market.

Finally, following the developmental appointment of Ali Martin-Mayer to McGill University’s legal team, Gillian Nycum, BCL/LLB’07, has been appointed Acting Assistant Dean (Admissions & Recruitment). Gillian previously held the role during a parental leave in 2014-2015. Since then, Gillian has worked as a Senior Advisor for Prof. David Lametti, M.P., and at Human Impact Lab, a non-profit creative studio working in partnership with Concordia University. She brings an inspiring vision of the role of admissions in expanding access to justice.