“No one ever says you can create your own job”: Catalyzing women’s big ideas 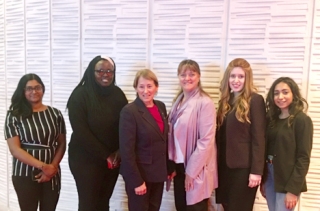 Randi Zuckerberg, Founder and CEO of Zuckerberg Media recently spoke at Place des Arts in Montreal about empowering fellow women to pursue their entrepreneurial ambitions without qualms, particularly in the tech sector.

In attendance were McGill Principal and Vice-Chancellor Suzanne Fortier, Dean of the Desautels Faculty of Management Isabelle Bajeux, and four young women who have benefitted from the McGill Dobson Centre for Entrepreneurship’s programming and who are on a mission to make their startup ventures a shining success: Inara Lalani (BCom’20) of Gynotek, Nivatha Balendra (BSc’19) of Dispersa, Perle Goldstein (BCL/LLB’21) of Avantage Emploi, and Vella Abur (BA’21) of Yonja.

Hear from the attendees

“One piece of advice that Randi shared that really stuck with me was if someone tells you that you cannot get a certain job that you want, you can actually go out there and create it. She really emphasized that being an entrepreneur has its own journey - that you’ll set out to do certain things and end up doing other things you never expected. It’s all about the journey of getting there, and taking in all of the experiences along the way. As a female entrepreneur myself, it was very encouraging to see someone as successful as Randi make it in the technology sector that is largely occupied by men.”

“Randi shared a few thoughts that really resonated with me. One of them was ‘Every failure can teach you how to do something better the next time’ and ‘Work, sleep, family, friends and fitness – every day I pick three of these’– as a law student who is also starting a business, I need to constantly remind myself to prioritize so that I stay balanced. My co-founders of Avantage Emploi have really helped me with this and I am eternally grateful for their support in my personal growth as we develop together through our business.”

According to the Information and Communications Technology Council (ICTC), Canada's digital economy is growing steadily. By 2021, ICTC forecasts that 216,000 new jobs will be created in this sector, for a total of 1,637,000 jobs. Only 25% of ICT jobs are held by women. Many factors can explain this disparity, and TECHNOCompétences believes that one of them is the lack of networks, mentors and female role models in this sector.

To help buck this trend, the Chamber of Commerce of Metropolitan Montreal is proud to welcome, on March 14, a leader who is deeply committed to the role of women, particularly in the IT sector, the former marketing director of Facebook: Randi Zuckerberg.

Passionate about tech and media, the Harvard graduate launched Zuckerberg Media in 2013. With her company, Randi wants to further encourage women of all ages to take an interest in tech and entrepreneurship. To do so, she creates varied content to reach a large female audience. Among other things, she is the producer of Dot., an animated series with a tech-savvy heroine as a role model for young girls, as well as Dot Complicated, a weekly radio show on the business world. She is also the best-selling author of four books for girls and women, both to inspire and motivate them and to explain how technology and social media influence our lives.

In addition to developing content to encourage women to become entrepreneurs, she is also an angel investor. The businesswoman wants to play a significant role in identifying the next generation of successful women business leaders by financing their projects.

Recently, Randi was appointed to the World Economic Forum’s Global Agenda Council on Social Media and the United Nations Foundation's Global Entrepreneurs Council, and was named one of the 50 most influential people in digital media by The Hollywood Reporter.